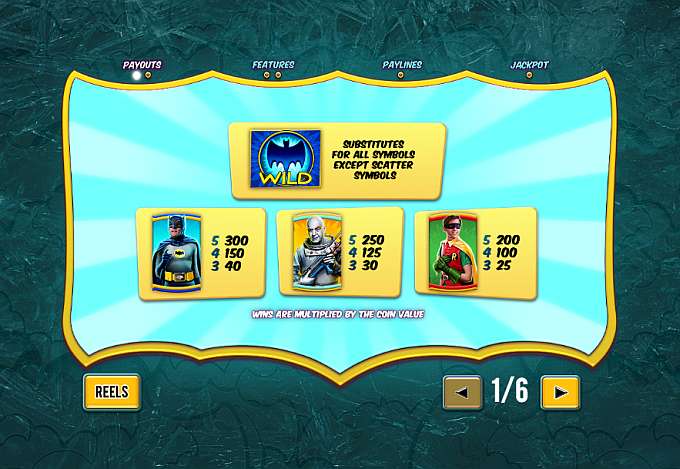 About Batman and Mr Freeze Fortune

Mr Freeze plays the villain in yet another top Playtech developed slot machine, once again based on the 1960s Batman serial. As with all the Batman slots in this series, there is a unique gameplay structure for players to enjoy, and this one sees a 4-5-6-5-4-reel structure dish out 1,024 ways to win in all. Batman and Mr Freeze Fortune has fixed wagers, so players are going to be able to wager anything from a warming 0.50 per spin, up a not-so-frosty 25.00 a pop. Those are some pretty cheap wagers for a multi-progressive jackpot slot and one with over 1,000 lines for you to win on.

Players will want to keep their eyes peeled for the Batman logo (also known as the Bat Signal) since it appears as a wild icon in Batman and Mr Freeze Fortune. The symbol can replace all others in the game except for bonus icons, and cash dish out tasty wins when 5 appear on a payline, too.

Four randomly triggered features can be won in this slot. At any point in the game, a prize vault may dish out 5x multiplier wilds, 10x multiplied winnings, a random Mr Freeze symbol, or Wild Mr Freeze Spins, which can see all wilds frozen in place with the added bonus that players will keep bagging free spins until they win something.

A bonus feature has also been included in this slot. It is known as the Batman vs. Mr Freeze Free Spins feature. It is triggered when you land 3, 4 or 5 of the bonus scatter symbols anywhere on the reels. This will trigger 10, 12 or 15 free spins, respectively. Players can play with 2,400 paylines during this feature, and any wild wins will be met with multipliers which range from 2x up to 5x in all. Multipliers can also be combined, resulting in particularly impressive cash prizes. The feature can also be retriggered with additional scatters.

Currenty there are no reviews for Batman & Mr Freeze Fortune. Be the first one who will review it.