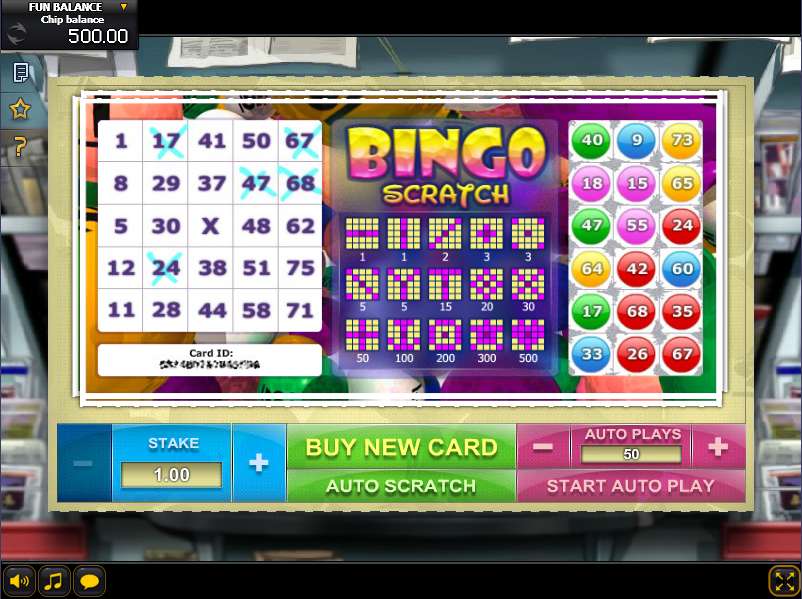 Both the games of Bingo, and Scratch cards are random number games that are very similar in nature. Bingo Scratch is a marriage of these two games that have a massive following all over the world. This electronic version comes to us from Games OS. Games OS is a development house that offers both social and online gaming solutions to the Global market. There is a top prize of 500 x wager up for grabs.

This game is set out just like the game of seventy-five ball bingo. It offers a five x five grid that makes for twenty-four numbers, and a free space marked by an X in the centre. This free space works similar to a joker or wild card, and helps to make winning combinations. Winning combinations are made when the numbers called make up a pattern on the bingo card. There are fifteen patterns in total, the more complex these are – the higher the prize.

Bingo numbers are not called, but are instantly produced by a random number generator. To win 1 x wager a horizontal or vertical pattern must be made. To win 2 x wager a diagonal across the grid, or a cross in the centre needs to be made by the numbers generated. The more numbers on the card that creates patters, then the more prize money the player wins. The highest prize is generated by a really sophisticated pattern, so it means the numbers generated must marry up to the pattern on the grid.

Bets can be placed by means of a user interface which features a ± button. Use + to increase the wager and – to decrease it. Wagers start at 1.00, and can be increased up to 5.00. Obviously the higher the wager, the higher prize money will be. Eighteen balls will be drawn, each marked with numbers from between 1 and 75 – the4se have to match the pattern on the grid.

Players click on the “Buy a Card” button for the new card to be generated. There is also an “Auto-scratch” button on the interface, as well as an Auto Play feature. The number of Auto-plays may be set by the player for anything from 1 up to 100 times. If fast and furious games of bingo, and instant gratification are the name of your game, then this could be the game to play. One card literally plays in seconds.

Currenty there are no reviews for Bingo Scratch. Be the first one who will review it.