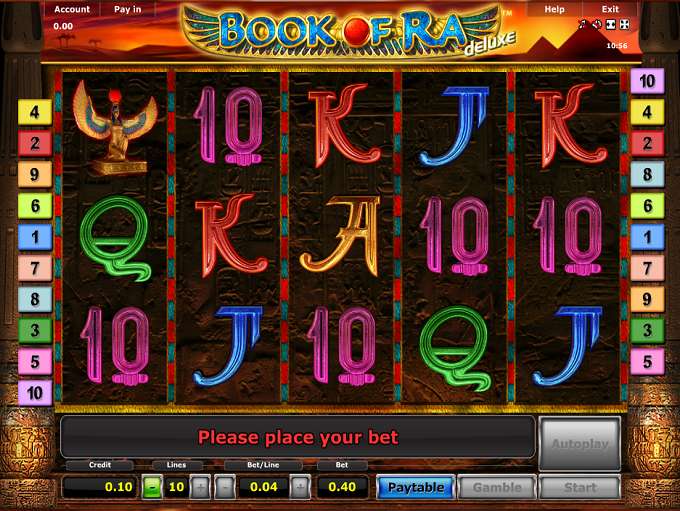 About Book of Ra Deluxe Slot

Book of Ra Deluxe slot offers us an Egyptian treasure hunting theme in the tradition of Indiana Jones. This video slot is a product of software development from Novomatic Gaming; a relatively new name to this reviewer. We do however believe that they are a well-respected brand as they are headquartered in Austria, and have NikiLauda as their brand ambassador. This is a game that is a favourite at Grosvenor Casinos, and five reel ten line game with an in-game top jackpot prize of 50000 for placing a maximum bet.

The time honoured Egyptian treasure hunt theme runs through this slot from reel to reel. These have by the way been set into the backdrop of an Egyptian temple complete with columns and hieroglyphics. Most of the icons animate and these include The Book of Ra which is one of the top paying symbols. Ra was the God of the sun. Ambient sounds are pretty neat, illustrations and graphics are good.

Paying the highest prize in game, we find the treasure hunter, he even wears and Indian Jones hat. Next comes a burial death mask, statue of Ra, Scarab Beetle, and card indices Ace, King, Queen, Jack and Ten.   The Book of Ra is the wild icon and it substitutes for all other symbols.

Pay-lines may be activated one at a time from one through to ten. Only one coin per line may be played, with coin values starting at 0.04 which makes the minimum wager only 0.40. This is a great price to pay for low rolling players. The top bet of 100.00 is made up of a coin size of 10.00 multiplied by the number of lines. Also not exact too high rolling a price, and certainly worth betting for the size of the top prize.

Land three or more Book of Ra icons on the reels and a free spins bonus is given away. A new screen opens to the tune of singing angels, and the Book of Ra opens too, and announces that new expanding icons will be used in this game, and ten free spins are being given away. We receive the King and an eye of Horus as our expanding icons in this feature. Players are expected to participate in the free spins feature, and click start for every spin. The feature can be re-triggered and we managed to re-trigger it on the 8th spin. A Gamble feature is also included for every win, but we chose to collect rather than gamble.

Currenty there are no reviews for Book of Ra Deluxe. Be the first one who will review it.