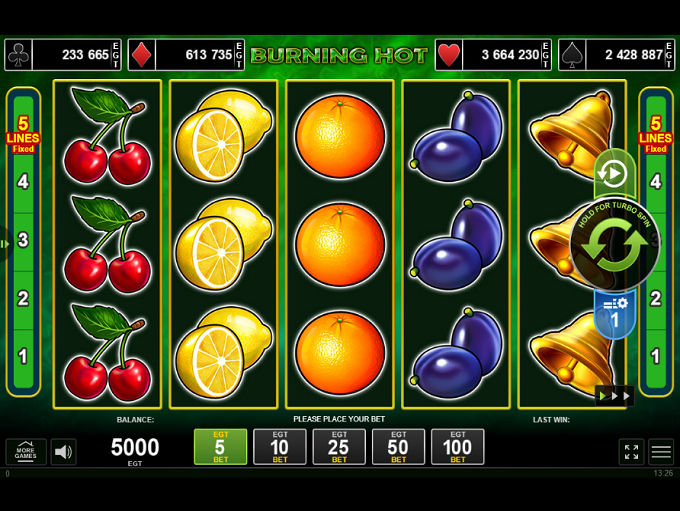 Again we take a look at another of European Gaming Technology in this Burning Hot Slot. This is a game that is linked to a four-tier progressive jackpot prize, but it also offers a top in game jackpot prize of 3000 coins. It is a five reel, five pay line video slot that is themed on its early counterpart the pub fruit machine.

Five reels have been set into a very simple backdrop, in a design that basically entails a plain background, colourful icons demarcated lines, and buttons for spinning as well as toggling wagers. When winning combinations are made, the background burst into flames, and that is about all the animation players will find.

Icons are 7’s which is the top payer, fruit – watermelon, the archetypal cherries, lemons, grapes, oranges and plums. It offers a lucky four-leafed clover which appears on the 2nd, 3rd and 4th reels, and this is the wild symbol which substitutes for all other symbols except for two scatter icons. These scatter icons are a golden dollar sign and a purple star. Players will also find a gold bell, but this is a low paying ordinary symbol much like the fruit.

Bets can only be placed over all five lines; this is fixed by the game. These start at one coin per line for a wager of 5.00, and can be increased by the player through 10. 25, 50, and 100. Auto-play may be switched on, but we advise that this should be watched as it continues indefinitely, and cannot be set to stop after a certain amount of spins. Reels may also be stopped by the player, and do not have to complete their random turns before being stopped.

Like all of European Gaming Technology’s slots, Burning Hot is linked to a four tier PJP. The Mystery Jackpot. When we play the base game we can see each of the values of these jackpot turning over, and adding up as we play. Each prize is associated with a different card suit, starting at Clubs, then Diamonds on the second level, Heart is the third level, and Spades offers the largest prize on the top level. It is a pick me type game where 12 cards are dealt face down, and the player needs to choose three. If the suits of the three chosen cards match, the corresponding PJP is won.

I enjoy the game