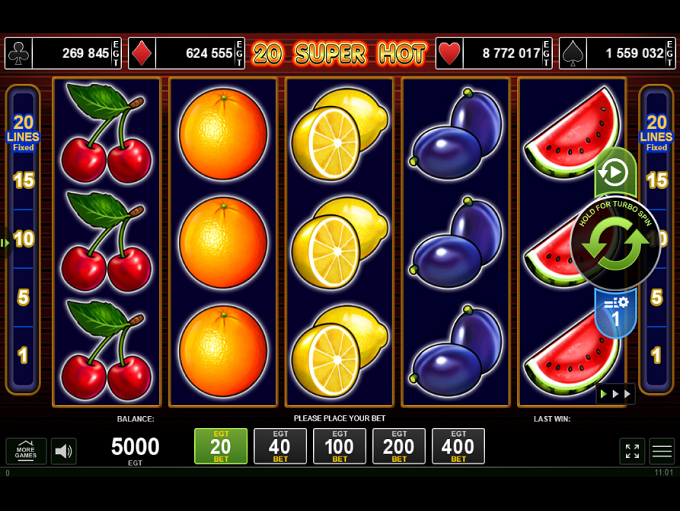 EGT otherwise known as European Games Technology is the software design company that is responsible for producing 20 Super Hot 777. They are Bulgarian based business that started in 2002, and this is the first of their games this writer has reviewed, however we don’t believe it will be the last. The company has thrived since the 2007 expansion of Bulgaria into the European Union, and recently did their first game installation into Italy. 20 Super Hot 777 is a five reel, twenty pay-line game that offers a top in-game prize of 10 000 coins.

This video slot is a Pub Frutie on steroids! It features classic Pub Fruitie icons such as bunches of grapes, cherries, lemons, oranges, plums, watermelon, and a top paying symbol which is a star. Sevens come into the game as the wild icon, and substitutes for everything else except scatters. The star is the scatter symbol which also offers the top paying prize of 10 000 coins. It is a brightly illustrated game, with less than slot-like ambient sounds. But then again some slots ambient sound are enough to drive the player crazy, this is not one of those games.

This slot could be a dream game for big jackpot chasers, or a fun game for small punters too. Lines are fixed at twenty, and this may not be adjusted by the player. Wagers start at a coin bet value of 1 credit, which means twenty credits per spin of the reels, and increases through forty, one-hundred, two-hundred and four-hundred. Auto-play is available and once started, continues indefinitely until the player decides it is time to stop.

It features a four-level mystery jackpot that we see ticking over at the top of the screen. These jackpots levels are illustrated by the four card suits, and can be won when the Mystery Bonus is triggered. This bonus game is randomly triggered after any spin of the reels has completed, and winnings have been collected. The player is invited to select from a field of twelve face-down cards until three matching card suit symbols appear. When this takes place, the Mystery Jackpot level that corresponds to the suit revealed is won. Spades is the highest paying suit in these Mystery Jackpot levels.

A gamble feature is available on all wins of less than 700 credits. Simple click the “Gamble” button, and choose Black, Red or Both. If both Red/Black are selected, the gamble automatically doubles, but the player is guaranteed to win. Lose and this game is automatically over.

yes thanks for for giveing me this great opportunity. to play 20 Super Hot casino games its the best sincerly yours gary brewer.

Good game - am enjoying it

I love this game