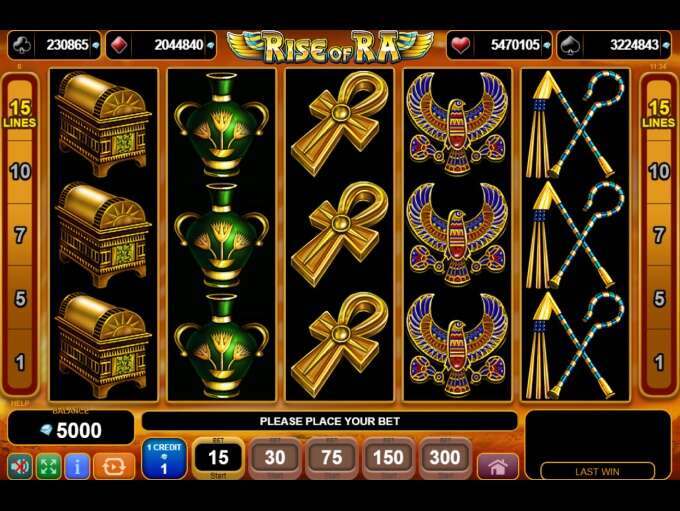 About Rise of Ra

Pretty much every online casino software provider has an Ancient Egyptian themed video slot, and this particular one is EGT’s. Rise of Ra is very stereotypical, which vases, Ankhs, emblems, the flail and crook, sarcophagi, a Pharaoh and his wife, hieroglyphic wall texts, the Sphinx, the eye of Ra, a statue of Anubis and a Scarab beetle all featuring as thematic icons and imagery upon the reels. Rise of Ra is a simple 5-reel, 15-payline video slot, which will permit players to wager coin values of 1.00. All paylines are adjustable, and Rise of Ra has a generously broad wagering range, with floor and ceiling bets fixed at 1.00 per line, per spin, and 300.00 per spin, respectively.

Now for the bit that all players love, the special features. The Scarab beetle is this slot’s wild symbol, and when it appears on the reels, it can also offer pay-outs as well as act as a substitute symbol. Wild icons offer players substitute symbols for all other icons, save for scatters. Wilds also double all wins in which they appear.

Keep an eye out for the scatter icon. That scatter simply has “scatter” written across a Hieroglyphic-laden wall. Scatters can see players pocket wins of 2x, 5x, 30x and 500x their stake, when 2, 3, 4 or 5 of them appear in any positions upon the reels. Should players land 3 or more scatters, they will also trigger a free spins bonus game. This bonus round offers a total of 15 free games, with a 3x multiplier, which is pretty generous.

A gamble feature has also been included into Rise of Ra. After any win worth less than 525 coins, players may choose to gamble. They must predict whether they next card will be a red or black to either double their winnings, or lose them entirely. It is not the most appealing prospect to gamble those hard earned winnings.

You will probably notice the rising counters on the top of the screen? These are progressive jackpots, and yes, there are four of them. Rise of Ra’s progressives are randomly triggered. When they are, you will be taken to a screen where you must match 3 cards of the same suit from a total of 12 cards. Whatever suit your matched cards happens to be will correlate to which of the four progressive jackpots that you have won.