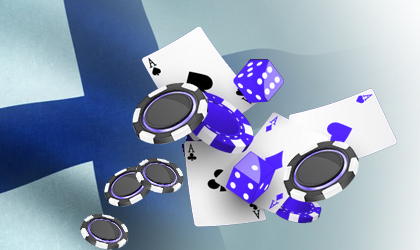 This is due to the fact that prestigious licenses, such as the Maltese and Gibraltar ones, allow companies to offer their service EU-wide. We have taken the measure of these online casinos and made a list with the best ones at the top. These casinos usually offer the best of the best when it comes to games, payment options and speed, customer support and interface.

The history of gambling in Finland is a complex one, and it has always been heavily regulated. With the advent of the internet as a source for entertainment and the regulations, more and more Finnish players have moved to online casinos, as they tend to offer a better experience on all counts. Read on to find out the details as well as our suggestions on where to play.

There are two online casinos that are allowed to provide games to Finnish players from Finland: Veikkaus and PAF. Of these two, PAF casino is certainly more commercial and internet-savvy, with Veikkaus mostly concentrating on keeping their monopoly-status alive despite the obvious shortcomings of it.

However, once you step outside the Finnish border you will run into an endless supply of Finnish online casinos. Most of these are operated by multinational companies, which often originate from Sweden and run their business from Malta. The latter is home to the trustworthy Maltese Gaming License.

Without a doubt, gambling or betting has always been part of Finnish culture, as is the same in all other cultures. It didn’t take long after independence was declared for the government to create laws for the industry, and these were mostly negative. Considering that we are talking about the 1920s, this is not surprising as at the time there was a trend of banning every possible vice for moral reasons. However, slowly the government started opening the markets, and at the same time creating a monopoly.

Finnish gambling laws are quite strict, though they cannot forbid Finnish people from playing abroad or online.

This is the basis of gambling laws in Finland. It determines which games and activities fall under gambling and regulates which bodies are responsible for these games. PAF has jurisdiction over Åland Islands, which is an autonomous region of Finland. They are not allowed to run games in the mainland, but they can offer them over the internet.

What’s interesting is that while other markets and countries have aimed for increasing the number of operators, in Finland the trend has gone the other way. There used to be three separate companies offering different activities, but as of 2017, they have all been combined into one.

Though the monopoly has started to receive increasing criticism, the government still insists on having a single operator market. Moving online into online casinos based in jurisdictions that are within the EU, the Finnish customer basically follows the law of the country that has granted a license to the casino. One added bonus of the European Union is that all the wins from gambling activities are tax-free.

The basic idea that the government seems to hold is that gambling should be illegal, but since that would lead to illegal gambling it is better to just control the entire market via a monopoly. A similar attitude is seen when it comes to alcohol, as the sale of hard liquors and wines is likewise monopolized under the government.

...this is to say that the basic idea of the regulations is minimizing issues caused by gambling. Results on that have not been so great, Finns ranking fourth amongst the biggest gamblers in the world. Finnish players head more and more often to foreign online casinos, as they have a lot more to offer than the national monopoly.

For a Finnish person playing online is as easy as choosing the right online casino. However, online casinos are not allowed to market within Finland, which is why most all marketing is done through foreign websites too. The best way to find a trustworthy casino for a Finnish player is to read through our detailed reviews and suggestions and pick the one that looks the best for you.

The best bet for Finnish players is to play at European online casinos, though there are a few other options at hand too.

1. Can I play in online casinos operating from Finland?

- You can play at Paf Casino as long as you are not from a handful of restricted countries like USA, Russia or Turkey.

2. What is the age limit for gambling in Finland?

- The legal age for gambling in Finland is 18

3. Where can I find online casinos that are aimed for Finnish people other than in Finland?

- You can either join any of the big casinos that operate within the EU, and have Finnish sites. Or you can look at the new line of Finnish online casinos that are aimed exclusively at Finnish players. These are often Pay-n-Play casinos.

- While the national monopoly does not offer bonuses, pretty much all online casinos operating outside Finland do so. If you’re a Finnish player looking for casino bonuses you best take a look at our suggested sites.

- This depends on where you play. We suggest sticking to safe Maltese online casinos, as you are guaranteed to get tax-free wins from there.

6. Are there live games for Finnish players?

- Some live casino dealers do offer Finnish croupiers. You can usually find these in online casinos aimed at Finnish customers.

7. What are the best payment options for Finnish casino players?

- Two options are above others: Trustly and e-wallets. Deposits and withdrawals through either of these methods tend to be instant.

8. What games are available for Finnish casino players?

- All the games! Slots, live casino games, betting, poker and many other game types just depend on the online casino you’re playing at. Check our reviews and choose carefully.

9. Where can I get help with online casinos?

- It’s always best to contact the customer service at the casinos directly, or consults the FAQ. Casinos that are for Finnish people tend to offer customer support via email and live-chat in Finnish and English. Occasionally also phone support is included.

10. Can I play casino games if I visit Finland?

- Yes, you can. Slots and table games are widely available, though land-based casinos are quite rare.