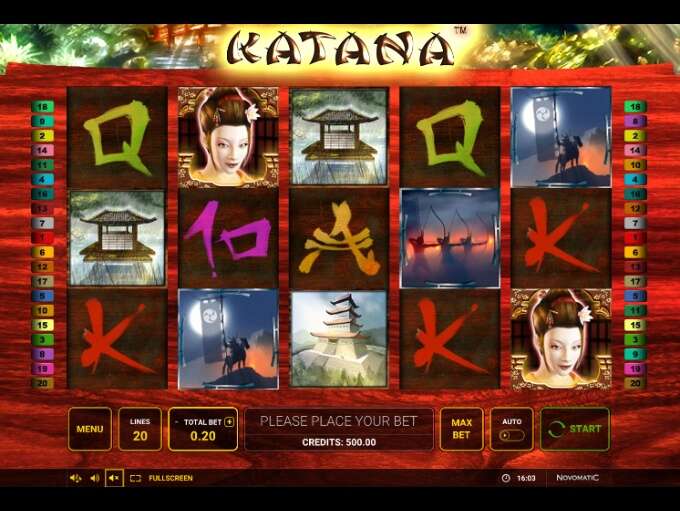 Katana has been produced by Novomatic, and it is a traditional Novomatic developed slot machine in terms of what it offers players. Katana utilises various samurai elements for the imagery on its reels, with players spotting katana swords, samurai masters, geishas and exotic looking Japanese imagery and locales present on the reels of the game. Katana features a total of 20 adjustable paylines upon its 5 reels. Players are also able to alter their line bets, so they can wager anything from 0.01 per line per spin, up to 100.00 per spin utilising all the slot’s 20 lines. Katana has an RTP (return to player) rate of 95.02% and can see players scoop a non-progressive jackpot which is capped at roughly 200x your total bet.

The samurai master (or Shogun) appears as a wild symbol in this slot. Just like in any other slot machine game, the wild symbol can substitute for all other symbols in the game, barring the scatter icon. Unlike other Novomatic slots, which tend to try and combine scatters and wilds; the scatter and wilds are two separate icons in this slot.

Scatters appear as katana swords themselves. Landing 3 or more of these symbols in any position on the reels during a single base game spin will trigger the slot machine’s free spins bonus round.

A gamble feature has been included in the Katana slot machine game, and it can be triggered after any spin in the game. We wouldn’t recommend that you do this, though, since your chances of winning are 50% or less. It just doesn’t seem to be worth it, especially with considerably big wins.

Once you have triggered the free games feature via the scatter icons, you will be issued a total of 10 free spins in all. It doesn’t matter how many scatters you locate; 10 spins are all you are going to get to start off with. During those free spins, the Shogun Bonus can come into play, which can see the wild symbol expand to occupy whole positions on the reels. Additional free spins can be won by landing more scatters on the reels during the free spin bonus round.