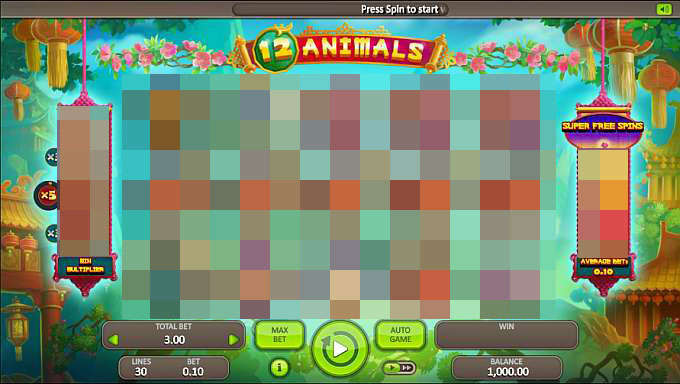 12 Animals is something of an oddity. Developed by Booongo, it has elements of both fun at the farmyard, and Chinese New Year worked into its design. The slot does focus on animals which are synonymous to both themes, so one might argue that there is something for everyone here. Players will note that 12 Animals is played over 30 paylines and that wagers are flexible enough for the game to appeal to all. At their cheapest, wagers will cost players as little as 0.30 per spin. However, at their costliest, wagers will be capped at 90.00 per spin. Players are going to expect good value for money for those kinds of bets, and 12 Animals duly delivers. As for non-progressive jackpots, they are capped at 2,700 coins in all and are won when 6 scatters appear anywhere on the reels.

Scatter symbols appear as lotus flowers, and they can dish out scattered wins (including the slot’s non-progressive jackpot) when 3 or more appear. Landing 3 or more of these will also trigger the slot’s free spin bonus round.

Yin and Yang symbols appear as wild symbols, and they can substitute for all other symbols in the slot, with the obvious exception of the scatter symbol. Wilds can also multiply winnings by anything from 2x to 3x in the base game.

Whenever a win occurs on the reels of this game, the winning symbols (or two scatters if you have them) will become sticky. A re-spin then occurs, whereby players have the chance to add to their winning combo, or bag that all-important third scatter to trigger the slot’s bonus feature.

Every 30 second, the Symbol of the Year (located to the left of the reels) changes. Players who land winning combos with those selected symbols will pocket 5x multipliers. They can also bag 3x multiplier on any combos featuring the previous or next symbol in the chain.

A total of 10 free spins are handed out to players at the start of the bonus feature. Random wilds can also appear during the bonus, and that can boost your chances of landing a win. Any winning combinations which feature wilds in this bonus round will be multiplied by anything from 2x up to 5x, depending on how many wilds feature in the winning combo.

Should a player fail to win in the feature, then a “Last Chance” spin occurs and will continue to happen until a win is acquired.

Currenty there are no reviews for 12 Animals. Be the first one who will review it.