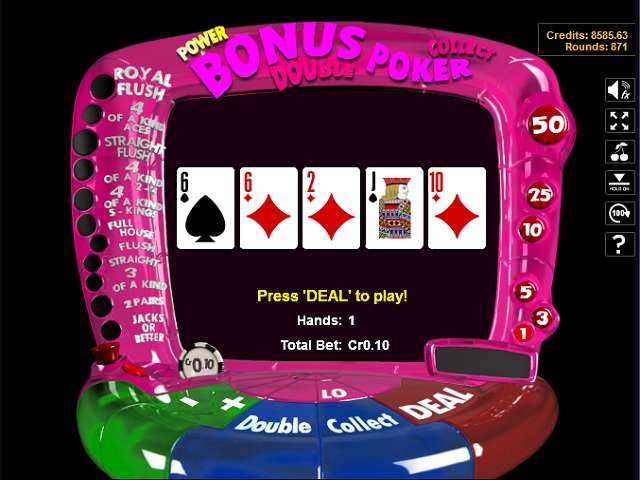 Usually, the payoffs of a video poker game mirror the basic hand strength guide for poker. If you're not playing with any jokers in the deck, that means a Royal Flush is best, a Straight Flush follows that and then four-of-a-kind and so on. Everyone who's played poker knows the list. But if you're trying to make your video poker game a little different, you can change the order. That's what was done when “Bonus Poker” was created The bonus is for four-of-a-kind, especially four Aces. In Bonus Poker, that hand pays better than a Straight Flush, even though four-of-a-kind is easier to get than a Straight Flush.

Some online casinos that offer Bonus Poker have their own pay scale, so the exact odds could be different. But the unique aspect of Bonus Poker is that there are variations in the payouts for four-of-a-kind hands. Four Aces always pays a lot more than any other four cards.

Anyone playing any version of Bonus Poker needs to adjust their strategy to take advantage of the unique features of the game. You simply cannot play Bonus Poker the way you would other video poker games. If you're going to gamble on this particular variation, you have to try for four-of-a-kind, especially the hands that pay the best. It makes no sense to try for straights and flushes if you have any chance to get four of anything.

There are even more extreme versions of Bonus Poker offered with even greater bonuses for certain four-of-a-kind hands. At many online casinos, you can play “Double Bonus Poker” and even “Double Double Bonus Poker.” In that game, four Aces pays off at 160-1, but if you have four Aces along with a 2,3 or 4, the payoff goes up to 400-1. Unless you play the maximum number of coins, that is more than a Royal Flush pays in this version of Bonus Poker.

There is another great boost available in Double Double Bonus Poker if you have four 2's, 3's or 4's. Normally, that pays off at 80-1, but if the fifth card in your hand is an Ace, the payout is doubled to 160-1.