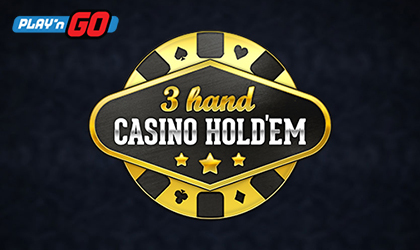 Play’n GO has announced the release of two new titles on the same day. This largely unprecedented move comes as finishing touch to a year full of successful releases. Both Inferno Joker and…

…3 Hand Casino Hold’em are promising to score high across the board.

Play’n GO has had a very successful year so far. Their release schedule has given the market some of the top-performing slots for 2019. However, what makes this dual release even more special is the fact that it marks this company’s dominance in terms of games released across the industry.

Inferno Joker brings a number of great features to the table even though this is a classic anchored in a simple 5x3 grid base game. Players who decide to go on this classic journey will enjoy all of the usual symbols such as golden bars, lucky 7’s and more. This combination of classic aesthetics and the modern base game has already proven to be a winning combination for both this company and many others who went down the same path.

On the other hand, the brand’s release of 3 Hand Casino Hold’em represents a step in a new direction as this company isn’t exactly known for delivering table games. With that in mind, this wouldn’t be their first table game release. This variant offers a standard Hold’em experience but with 3 hands being played at the same time.

That way, players are presented with 3x the chance of scoring a winning hand.

Johan Törnqvist, Chief Executive Officer at Play’n GO, offered his comment regarding the new releases: “We are well-known for our slot prowess, and Inferno Joker is a strong addition to our extensive portfolio. With the release of 3-Hand Casino Hold’em we are highlighting, not only the variety of entertainment that we have to offer but also showing that we are bringing the same creativity and innovation that we bring to our slot to our table games as well. We are entering the final throes of 2019, it’s important for us to finish just as strongly as we started and with what we have planned, that’s exactly what we’ll do.”

Both titles will be available at the supplier’s affiliated online casinos.

Play’n GO is one of the major suppliers of online slot games and other gaming content for the iGaming industry. This company has been operating in the iGaming arena since 1997 when it was officially founded. It specializes in high-end games that bring immersive graphics as well as engaging base game mechanics to their users.

The company has managed to become one of the authorities in the industry. This has allowed it to establish partnerships with a wide variety of tier-one operators working in various regulated markets around the world.

Aside from its impressive game portfolio, the company also covers a full spectrum of support software solutions that enable operators to have full control over their content.

Check Out Vibrant Visuals and a Catchy Soundtrack in Animal Madness