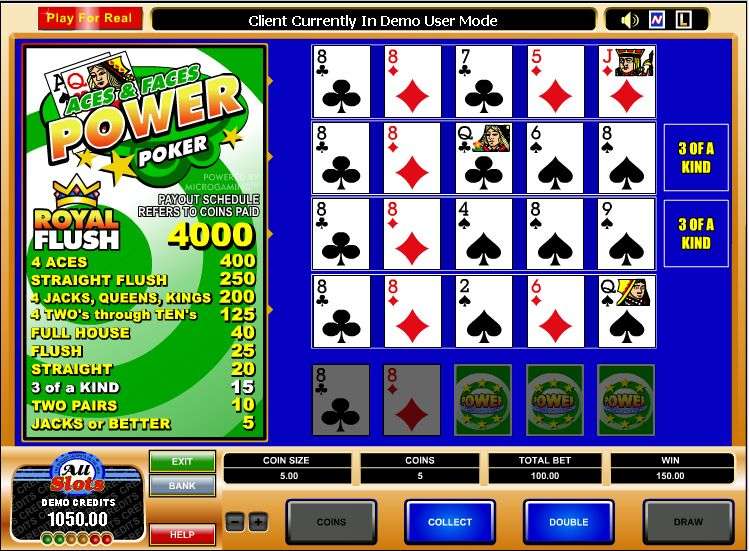 Online video poker is a popularly played game. It has always been popular in land casinos, and has transitioned well into the online gaming genre. Each software developer may design games with the same name as these are in the public domain, however, each designer is also able to place their own stamp on a particular version. This version of Aces & Faces Power Poker is brought to us for our enjoyment from the comfort of our own homes from Microgaming. Microgaming is one of the best-known designers in this industry.

Fundamentally the most special feature of Aces & Faces Power Poker is the fact that it is mega multi-handing video poker. In other words – if one deck of cards is just not enough - this is the game to play. From four to one-hundred hands may be played simultaneously, and yes, this does make the screen rather busy. It is not for the faint of heart, and we would suggest that players that are new to video poker, play in demo mode first.

Obviously there are increased ways of winning because additional hand rankings apply in such a large game. But players must keep their eyes on the prize, as well as appreciate some awesome graphics and sound.  Traditional poker hand rankings do count, but obviously with more hands in player, there are many more chance for winning, in particular with the hand “Four of a Kind. Many other video poker game only allow two or three of these hands. For examples Aces and Eights!

The Jacks or Better rule applies, and this is a winning hand, so, there are ample opportunities to nab Jacks or Better pay-outs over multiple hands. The highest pay-out for a single Royal Flush hand is 4000 coins on a maximum bet. As in the majority of video poker games, the maximum wager is five coins, at a value of 1.00 each, and the player should try to place the maximum bet in order to reap the maximum reward. Aces & Faces as we see in the name of this game, also pay better than other cards.

Once again, as is popular in this genre of online gambling, a “Double or Nothing” bonus game pops up after every win. The choice is the players’ they must decide to be daring and risk losing everything, or doubling their winnings. Or rule of thumb is to risk small winning amounts that don’t hurt so much when we lose, and never play with big wins. Winnings keep on doubling, as long as the player keeps saying yes, and they win!

Currenty there are no reviews for Aces & Faces Power Poker. Be the first one who will review it.