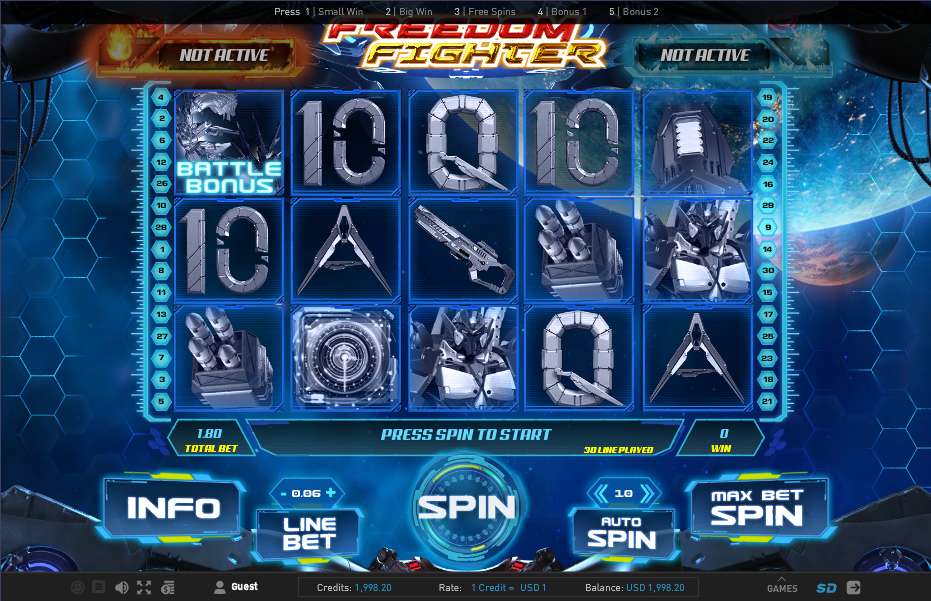 The Freedom Fighter video slot has been developed by Gameplay Interactive, and is quite a bizarre one. This video slot sort of resembles Transformers, although for obvious licensing reasons, it cannot be called that. Unofficial or not, that is exactly what the Freedom Fighters slot is supposed to be “themed on”. Die-hard Transformers fans aren’t going to like it (they can play fully licensed Transformers slots from IGT), but if you happen to be playing at a casino offering Gameplay Interactive slots, and not IGT ones, it might be your cup of tea. Freedom Fighter can be played over 5 reels and 30 paylines, and it is jam-packed with bonuses, as well as two progressive jackpots. Players can choose their line bets, but the number of paylines are fixed. Bets in this slot start at a floor of 0.30 per spin, and can rise as high as 36.00 per spin in total at the wagering ranges ceiling.

The wild symbol in this slot can substitute for all icons in the game, barring scatter icons, bonus icons, and battle bonus symbols. Wilds cannot offer you any cash prizes on their own, they merely act as replacement symbols.

Scatter icons appear as rocket-looking icons, and they can naturally offer you scattered wins worth 2x, 10x, or 100x your total bet. Three or more of these symbols appearing anywhere on the reels will also offer you a free games feature. You will get 8 free games and get to choose one weapon from the Hall of Weapons. Those options include triple free games, random expanding wilds, extra wilds, frozen expanding symbols, or stacked symbols.

The second bonus is known as the Battle for Freedom, and is triggered by landing 3 Battle Bonus icons on the reels. This bonus will not be as exciting as the last bonus round, and if you are playing the slot on an older computer, it may run slow for you, or lag.

This slot’s second bonus round features a battle between Freedom Fighter and Eon Red. You must pick which fighter you are going to back, and they will then duke it out between them over several rounds. Players can pocket wins if their fighter wins the match, and there are five rounds to play, so you do get multiple chances to win. You can’t do anything but watch as they fight though, which makes this graphics heavy bonus rather poor.

Currenty there are no reviews for Freedom Fighter. Be the first one who will review it.