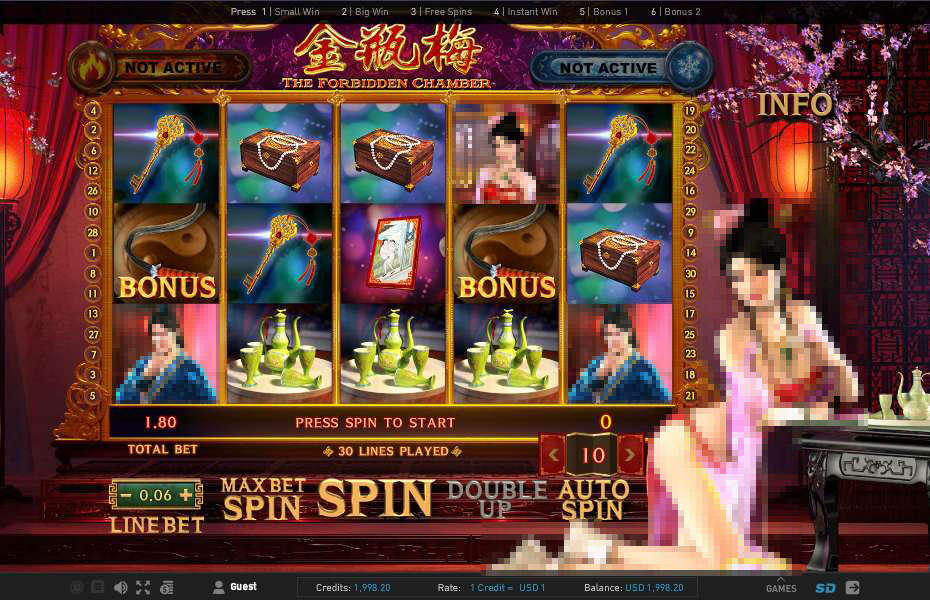 About The Forbidden Chamber

This slot is designed and developed by Game Play Interactive, and to be fair, it can take quite a while to load. That is troublesome for players on older computers. If that isn’t too much a worry for you, then you’ll be treated with a very naughty opening screenshots of some gorgeous Asian girls, and one very lucky man. That appears to be the theme of this game. What makes it even naughtier is that the graphics are particular superb. There will be many players who won’t find this sort of things their cup of tea. If you do, you can wager on the 5 reels and 30 lines in this slot by choosing line bets of 0.01 up to 1.20, which will see your cup range from 0.30 per spin, up to 36.00 per spin, respectively. Yes, that is a quite odd wagering range, and it doesn’t really make sense, but that is the way it is. The Forbidden Chamber slot contains two progressive jackpots which you can win.

If a player lands the red wild icon anywhere on the screen, it will try its hardest to replace all other symbols in the game to provide you with a winning combination. It cannot replace scatter symbols or bonus icons, but it can expand to occupy the whole of the third reel if it appears there.

Those other two special features are triggered by landing bonus icons on the reels. The chest and the key icon appearing side by side on the reels will trigger an instant win cash bonus. Meanwhile, if a player can land 3 or more of the bonus icons anywhere on the reels, then they can trigger the Room of Pleasure bonus game. You can select from a total of 3 scrolls to win instant cash prizes. Once the third selection has been made, the bonus ends and all cash prizes are paid out.

The theme of this slot is potentially going to cause more fuss than its gameplay structure. But it has to be praised for being as bold as it is, even if this will turn some players away from trying it.

Currenty there are no reviews for The Forbidden Chamber. Be the first one who will review it.