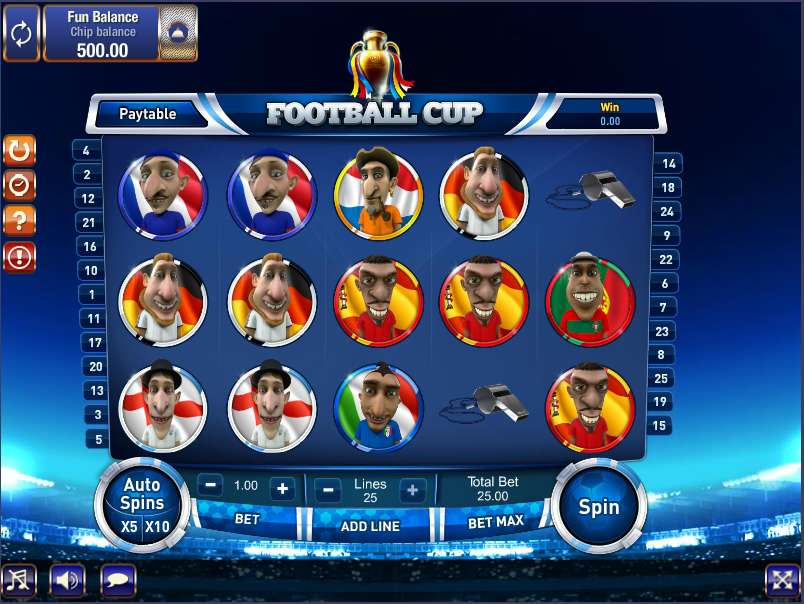 There are plenty of Football themed video slots out on the net, so if Games OS are going to beat the competition, they are going to have to do something rather special with this slot. Football Cup contains decent graphics, but is perhaps a little stereotypical with the “players’” appearances that they have chosen. That being said, it is at least a comical approach to what amounts to a rather overproduced genre of slots. The unimaginatively titled Football Cup slot, is played over a total of 5 reels, upon which sit 25 paylines. You can choose bets of 0.20 up to 2.00 per line, which gives the slot floor and ceiling bets of 0.20 per line, per spin, and 50.00 per spin, respectively. Football Cup is not cheap to play by any means.

With a slot this expensive, and with such a generic theme, most players will be hoping for really excellent special features. They aren’t really going to get them, we’re afraid. The wild symbol is made up of several countries’ flags, and as a wild, it can replace all other icons in the game, barring bonus symbols. Wilds don’t pay-out winnings on their own in this slot.

After any win in the game, the player will land a re-spin. All of the reels that feature the winning combination are held, whilst all of the others are re-spun to land the player another win.

A gamble feature has also been included in this slot, and it is a penalty shootout. You have a fifty percent chance of success. This feature – as well thought out as it is – really isn’t worth the risk if you have landed big wins.

In the Lucky Locker Bonus, players can choose any locker on the screen to pocket some items left behind by football players. The items that you acquire will then correlate to cash prizes, which are paid out to you as an instant win. This bonus is rather dull, if we’re being honest.

That isn’t the only problem with Football Cup. The stakes are way too high for such a simplistic slot. You also don’t have a good chance of landing the bonus, and the re-spins often result in you winning little more. Unfortunately, Football Cup is a slot which has brilliant graphics, but a pretty poor collection of free spin features and is too expensive for most players to wish to bet on.

Currenty there are no reviews for Football Cup. Be the first one who will review it.