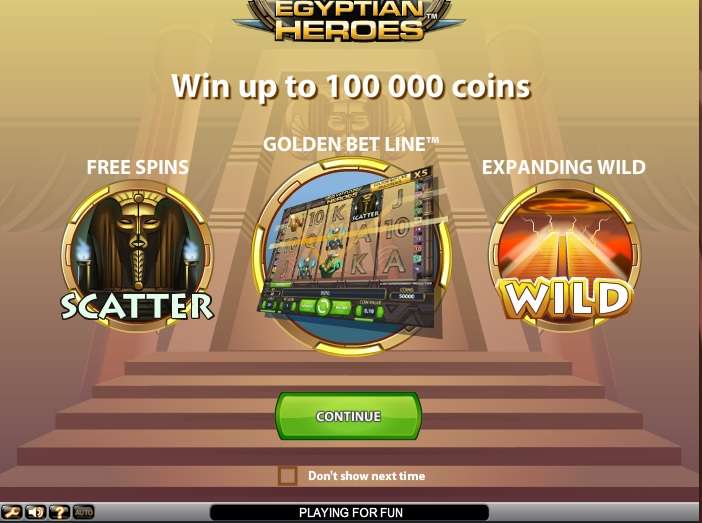 The game is currently not available
Please see other games from the same category.

The Egyptian Heroes video slot has a top prize of 100,000 coins to offer you. and that non-progressive pay-out is certainly going to grasp your attention. However, if that isn’t enough, then why not look at some of the other features of this rather old fashioned Net Entertainment developed slot? Egyptian Heroes features a standard 5-reel and 20-line with coin values, betting levels, and lines all adjustable. Coin sizes from 0.01 up to 0.50 can be selected, and players can bet anything from 0.01 per line, per spin, up to 100.00 per spin in total on this game.

In this game, every single spin will see a “golden bet line” added to the reels. It could be any one of the twenty paylines which feature in the game, as it changes randomly on each spin you make. If you should land a win on this line, then you will pocket a multiplier which ranges from 2x up to 5x the normal rate of pay for your winnings.

The pyramid is Egyptian Heroes’ wild icon. As a wild, it can replace all other symbols in the game, barring the scatter icon. The bad news is that it can only appear on the second, third, or fourth reels. The good news is that it is an expanding wild symbol.

All of the other icons in the game are Egyptian gods, and cartoon human looking ones, at that.

Currenty there are no reviews for Egyptian Heroes. Be the first one who will review it.