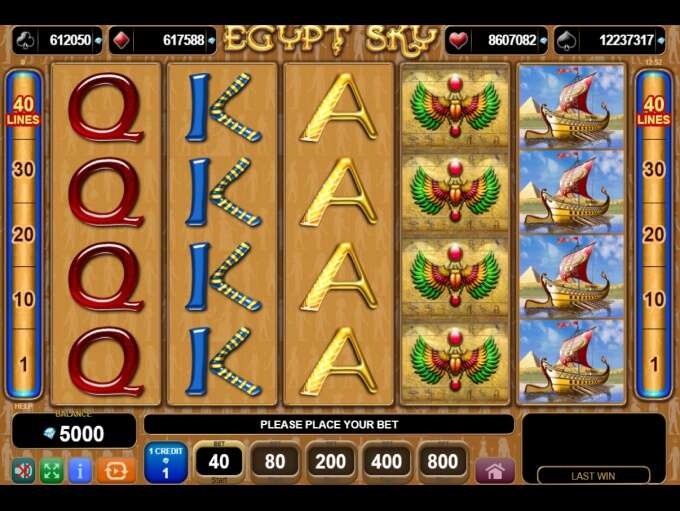 Egypt Sky is one of EGT’s progressive jackpot slot machine games. The video slot features four progressives, and an Ancient Egyptian theme. The symbols on the reels are mostly all stacked, so the potential is there for you to win sizeable sums of cash over multiple lines. The Egypt Sky slot features 40 paylines over its 5 reels, although you can play with less if you wish. The slot also offers players the chance to adjust their wagers, with minimum and maximum bets ranging from 40, to 800 coins per spin, respectively. Aside from the four progressives, the next highest sum of cash you can take home in this slot via a standard symbol is 2,000 coins, which can be won by lining 5 of the Pharaoh icons across any active line.

This slot utilises the Ankh as its wild symbol. As a wild, it can replace all other icons in the game. It cannot substitute for the scatter icon, though. Wilds are only capable of appearing on the second, third, and fourth reels in this slot.

A gamble feature has been included in Egypt Sky, although it really isn’t worth a look. It can see you gamble any winning worth less than 1,400 coins, but your chances of doubling your wins are 50%, so it’s a big risk.

The Jackpot Cards feature is the only way to win a progressive in this slot. The feature is randomly triggered, and players will get to win a jackpot based on which card suit they match. The four progressives each have varying sums of cash to offer you.

If you are fortunate enough to land 3, 4, or 5 of the scattered River Nile icons anywhere on the reels, then you will trigger a free spins bonus game. Three, four, or five scatters will afford you a total of 3, 5, or 7 free spins, respectively. Players will also get to play with a wild feature in this bonus. Whenever a wild appears during the bonus round, it will expand to occupy all of the positions of any given reel. This wild will then remain expanded for the duration of the free spins bonus game. If you were to land wilds on the second, third and fourth reels at once, you’d have all three central reels wilds, resulting in massive wins.

Currenty there are no reviews for Egypt Sky. Be the first one who will review it.