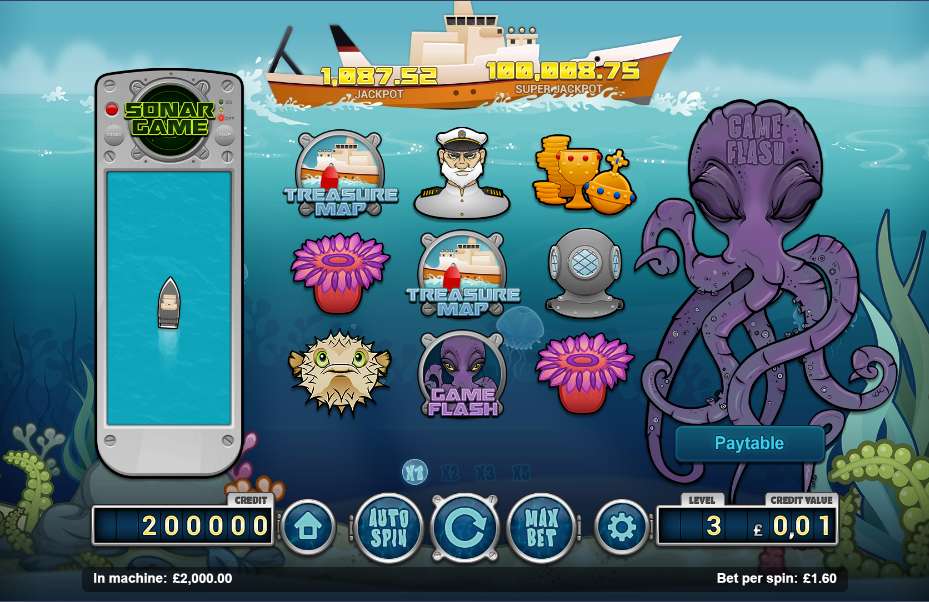 Magnet Games are one of the smaller-scale casino software developers in the online gaming world. Nonetheless, they have come up with something rather special in their Deep Blue slot. The game naturally contains an underwater adventure theme, and has an unusual gaming engine to say the least. There are 3 main reels to the game, but players will instantly be drawn to the Sonar Game box to the side – we’ll come to that in just a moment. Deep Blue will not allow players to alter their bets much, but wagers can range from 0.08 per spin, up to 8.00 per spin total. Expect to be able to compete to win two progressive jackpots in this slot machine, with the Jackpot prize being worth several thousand credits, and the Super Jackpot prize being worth roughly one hundred thousand credits.

Players do not have to worry about paylines in Deep Blue. Instead, winning combinations are acquired in clusters. Players need to land 3 or more adjacent icons (either horizontally or vertically) in the 3x3 grid to win a cash prize.

Three adjacent Kraken symbols triggers a Game Flash bonus. This will instantly increase the value of the prizes in the game.

Deep Blue is an overly complex game for a slot which features a 3x3 grid and very few wagering options. It makes for an interesting game to play, but can it really be considered a true slot machine game?

Currenty there are no reviews for Deep Blue. Be the first one who will review it.