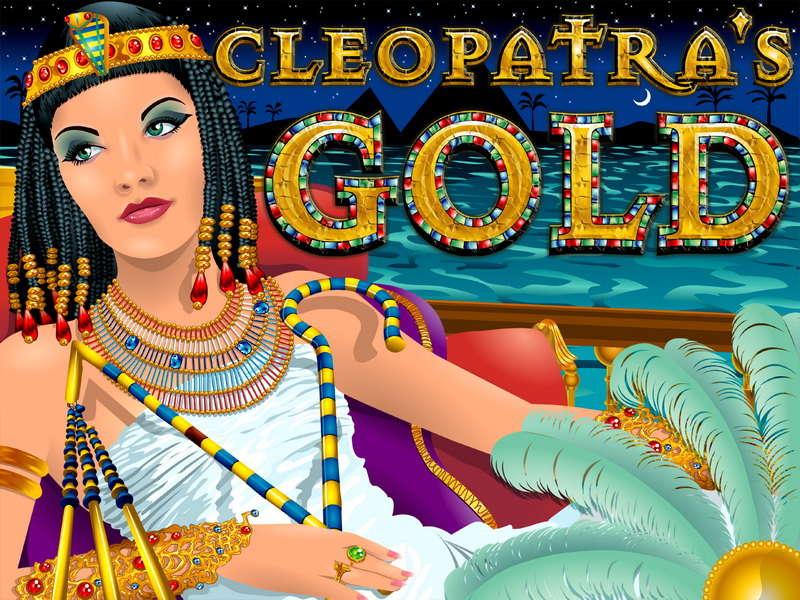 There are many Ancient Egyptian themed slots out there, all wrongly themed on Cleopatra (she was Pharaoh during the Greco-Romano period, long after Ancient Egypt’s decline) and Cleopatra’s Gold is just another one of them. This progressive jackpot slot has been designed and developed by RTG, and features the same stereotypical imagery as all its counterparts, coupled with very bright and colourful high-playing card symbols. Cleopatra’s Gold is played over 5 reels and 20 lines, and contains minimum and maximum wagers of 0.20 and 100.00 per spin, respectively. Typically, the non-progressive jackpot in this slot machine game is worth around several thousand dollars.

Wild symbols appear as pretty poor representations of the last Queen of Egypt herself. This stereotypical image of Cleopatra VII Ptolemy is responsible for dishing out a secondary, non-progressive prize worth 10,000 coins, as well as substituting for all other symbols, save for scatters. Players will also find that the symbol can double the value of all wins in which it appears. Yes, this is a very multi-purpose wild symbol.

Scatters appear as the pyramids of Giza, and can offer you wish worth up to 500x your total bet when 2, 3, 4 or 5 appear anywhere on the reels of the slot during a single spin. Scattered pyramid symbols can also trigger a free spins bonus when 3 or more appear in any position on the reels.

To win the progressive jackpot, players just need a bit of luck. The jackpot is triggered entirely at random, so there is precious little you can do to influence your chances of landing the big jackpot win, save for just keep on spinning the reels of the Cleopatra’s Gold slot machine game.

To begin with, players will begin the bonus with a total of 15 free games. During the feature, any prizes you manage to scoop up will be tripled courtesy of a 3x multiplier. Players can retrigger the feature by landing an additional 3 scatters on the reels during gameplay.

Cleopatra’s Gold is a so-so slot machine. It neither expands on the Ancient Egyptian theme, nor butchers it. This slot fits perfectly at home with the countless hundreds of other slots with this same theme.

Currenty there are no reviews for Cleopatra's Gold. Be the first one who will review it.