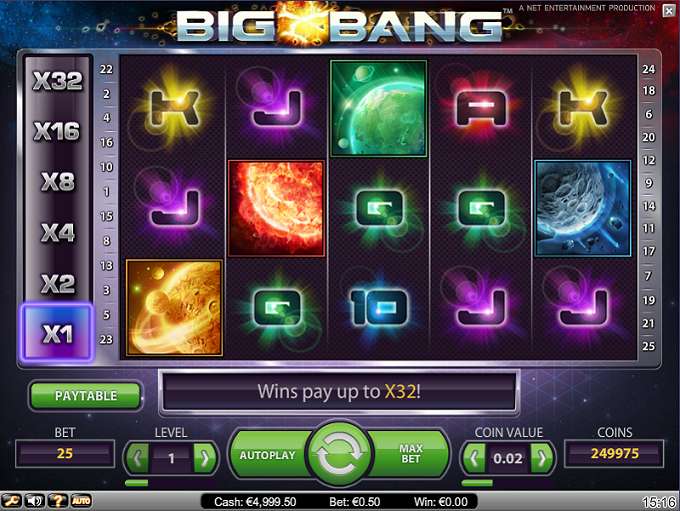 Big Bang is another video slot offering from the Net Entertainment portfolio. This Swedish developer has amassed a large portfolio of very high quality slots and is one of this writers’ favourite gaming software designers. This is a five reel, twenty-five pay-line slot with a massive 268 032 coins available as a prize.

Themed on the theory of the Big Bang, this astronomical game from NetEnt has a great many special features. It is cosmic in design, and stars many symbols on the theme. Symbols such as photos one might find that have been taken by the Hubble telescope. It is all about bright lights, colourful universes and planetary beauty. Ambient sounds are appropriately digital and spacey.

There is an image of the surface of the sun, a yellow planet with moons spinning around it, a massive green planet with a ringed moon, a purple planet and moon, as well as a blue image of the surface of a planet. Balance of symbols are card indices Ace through ten, and the wild is a full picture of the sun which substitutes for all other icons. Being wild for every other symbol, allows for even more high winning combinations.

Betting takes place starting with a coin size of 0.01. This can be increased through 0.02, 0.05, 0.10, 0.20, and 0.50. The video slot also allows players to choose a bet level of one to four which basically means one, two, three or four coins per line. The amount of lines in play cannot be adjusted by the player and is fixed at twenty-five, making the highest playing wager 100 coins. Big Bang can however be played far more cheaply by placing a smaller coin size as bet level. An Auto-play button is available to set between ten and one-thousand spins, and also offers advanced features.

To the left of the reels in the Big Bang slot we find a Multiplier Meter. In this feature after ever sequential spin that results in a winning combination, we see it climbing and increasing exponentially. This doubles on each consecutive win, and can climb as high as a 32 x multiplier. It is this Multiplier Meter that allows for this slot to pay out some very large wins. The feature stops climbing, drops and reverts back to a one x multiplier (x1) when no winning combination is made.

Currenty there are no reviews for Big Bang. Be the first one who will review it.