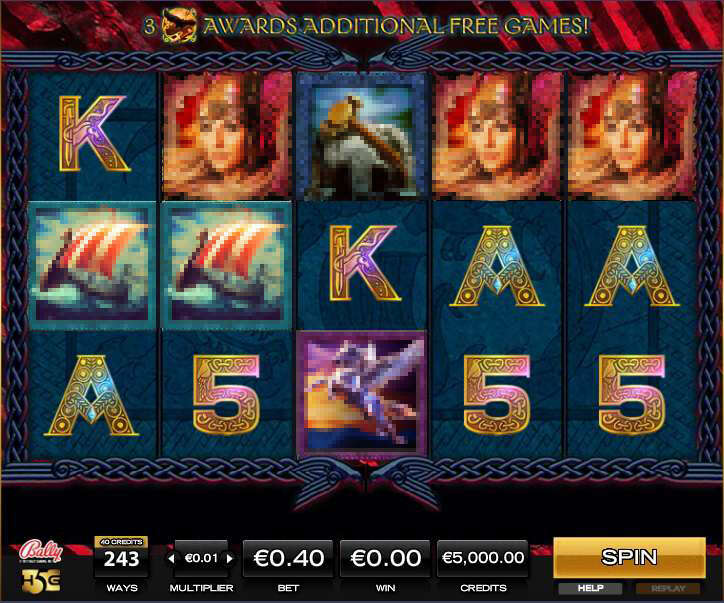 Up to $100 Cashback. $10 minimum deposit & a wager required to participate. Cash back is withdrawable as cash (subject to minimum $10 withdrawal)

Valkyrie Queen is a mythological video slot, and one which has been created and developed by Bally Tech. The famous land-based slot developers have come up trumps with this title, in terms of how it acts and behave, which is exactly like a land-based title. As for entertainment, not everybody is going to find the title a thriller. Valkyrie Queen is simplistic in terms of betting, too, making it ideal for first-timers. Players can opt to wager anything from 0.40 up to 120.00 a spin on this game, which is fine when you consider that there are 243 paylines spread on its 5 reels. Valkyrie Queen also carries a rather smashing jackpot, which is fixed at 500x your total bet in all.

Valkyrie Queen has a wild symbol which is represented by the slot’s logo. This icon can substitute for all other symbols in the game, with the exception of the scatter icon. Wilds can only appear on the second, third, and fourth reels of the game, though.

If a player lands 3 scatters symbols on the reels, they will trigger a free spins bonus round. There are no scattered wins to be had in this slot, just the feature. They appear as eagle icons, and can reward you with a total of 10 free games. Scatter symbols can only appear on the second, third, and fourth reels of the slot game. The free spins bonus round in this slot is easily the best feature of the game, though, and reason enough to have a look at it.

Once you have the 10 free spins under your belt, you will be invited to play with the tumbling reels feature. A different set of reels is used during this bonus round. Landing any 3 of the new scatter icons which appear will see you bag 5 extra free games. Players will exit the bonus when they have either played 60 free games, or ran out of free spins. Now, onto that tumbled reels feature we mentioned.

During the free spins bonus, any winning symbols which appear will be replaced by new ones from above. When this happens, it is possible for players to bag multiple wins with just a single free spin. Understandably, this can mean that you bag plenty of big wins with relatively no effort at all. It is the only real endearing feature about the Valkyrie Queen free spins game if we’re being totally honest.