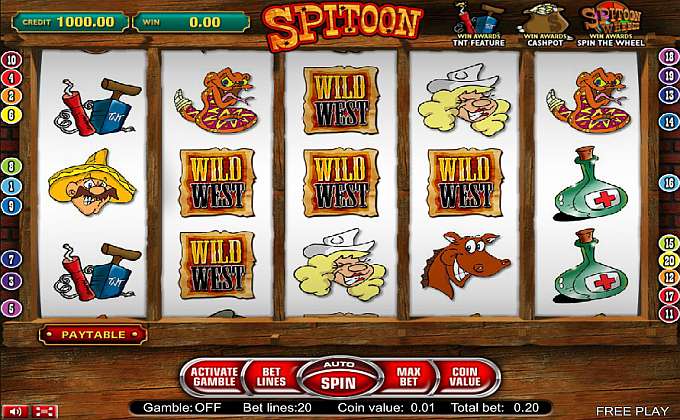 Developed by little-known Storm Gaming Technology (also known just as Storm Gaming), Spitoon is a wild-west themed slot, and one which has cartoony, but somewhat inferior graphics, all of which highlight the slots theme. Expect to find cowboys, cowgirls, horses, TNT, first aid potions and rattlesnakes on the reels of this bizarre little game. Spitoon features just 20 paylines, and players can adjust them. So too can the coin values which range from 0.01 up to 0.25. At its cheapest, the Spitoon slot will set you back just 0.01 per line per spin. However, if you’ve got cash to burn, you can wager as much as 5.00 a spin on this simple video slot. It is worth noting that the non-progressive jackpot is capped at 10,000 coins in this game, and that prize is yours if you can land 5 of the Wild West symbols on any active line.

That Wild West symbol doesn’t just dish out the top prize in the game, it also acts as a wild symbol. This means that it can replace any others in the game, save for the bonus icons. There are 3 such special symbols which appear in Spitoon. The first of these is the Spitoon Wheel symbol. Players who land these symbols 3, 4 or 5 times in any position on the reels will trigger a free spin bonus.

Landing 3 or more TNT symbols on the reels will trigger a TNT-themed feature. In that bonus, players can blow up TNT to win instant cash prizes until the stop sign appears.
Lastly, money bag symbols can deliver instant win cash prizes via a Cashpot Feature if 3 or more appear anywhere on the reels. In this bonus, the money bags are then shaken until nothing remains in them, offering players a cash prize.

As for the aforementioned free spins bonus round, that feature is incredibly simple. Don’t expect special perks to appear in the feature. Players can, however, start the bonus round with 3, 5 or 10 free spins if they land 3, 4 or 5 of those Spitoon Wheels symbols on the reels, respectively.

Currenty there are no reviews for Spitoon. Be the first one who will review it.