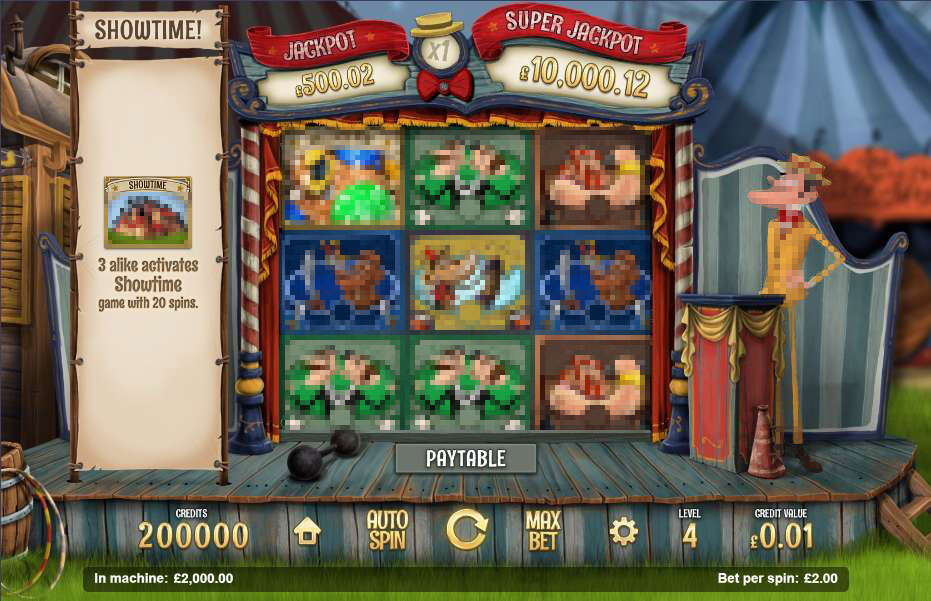 Magnet Games tend to develop some rather bizarre themed slots, and Side Show is just one of many to come from their ranks. This game is based on fun fair side-shows, and its theme and imagery portray as much. Side Show is not your typical, run-of-the-mill slot, though, in that it contains a 3x3 reel structure, with two progressive jackpots and no paylines. Instead of bagging wins on lines, players are going to need horizontal, vertical or diagonal trios of symbols on the reels of this game, with all winning symbols being replaced by new ones from above, giving players a second (or dare we say third) chance of bagging wins on a single spin. Side Show can see players able to wager anything from 0.10 per spin up to 10.00 a spin, so it is quite a cheap game to play. Side Show’s two Jackpot and Super Jackpot progressives typically offer several hundred, and several thousand credits, respectively.

There are a couple of bonus rounds to be enjoyed in this game, including Fortune Teller, Spinning Hand, Balloon Pop, Showtime and Game Flash bonuses. The Fortune Teller bonus can see players able to bag wins worth up to 1,000 via diamond or clover cards, potentially pocket a progressive by landing 4-coin cards, or lose a life via death cards. Three death cards ends this bizarre bonus.

The Balloon Pop bonus can dish out cash prizes worth up to 2,500 coins, or multipliers and progressive jackpots by popping balloons.

Other features including the typical Game Flash bonuses, Showtime rounds and cash-awarding Spinning Hand bonuses can also be played in this Magnet Games slot. Personally, we’re not a huge fan of this (or other Magnet Games slots). Whilst the slot machine is brimming over with bonus feature, its design leads its away from being a true slot, and its special features are not only overly complex to understand and difficult to trigger, they also seldom pay out the big bucks that this slot is apparently capable of delivering to players.

Currenty there are no reviews for Side Show. Be the first one who will review it.