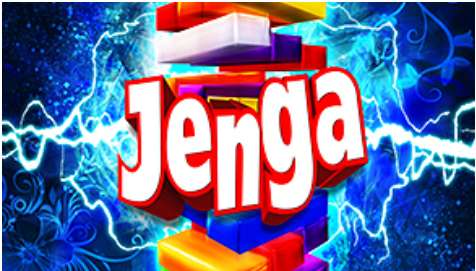 New Customer Offer. T&C’s Apply 18+. Bonus Money is non withdrawable until the 1X play through requirement is fulfilled. All Bonus Money needs to be played through within 30 days, otherwise it will expire.

Jenga is a well-known board game, but it is also a pretty unusual but popular slot machine game, too. Well, one would be hard pressed to call it a slot, but it has nonetheless been marketed as one. Jenga features a central colour tower, upon which sit a total of 18 lines. Three colour bars occupy each “line” in the game, and the player must match three colours to win prizes. Betting ranges from 0.05 up to 25.00 per line, which gives you a wagering range of 0.05 per line per “spin”, up to 450.00 per game.  Because of the way it works and its special features, Jenga can be a messy game to play. The more you play it, though, the more you will understand exactly how it works.

The objective in Jenga is to connect blocks of the same colour. Players can win prizes by linking up identical colour blocks on each line. Several special blocks also appear in the game, alongside the standard purple, green, orange, yellow, red, white and blue blocks.

One such block is the Magic Block. When this block appears, it will randomly transform into one of the standard block colours around it, to give you a greater chance of landing a win.

Layer bombs are also present in the Jenga game. When these appear, they can replace 2, 4 or 8 layers (lines) of the tower. If the player manages to collapse the tower, then they will trigger a bonus round. These come in quite handy, as they also replace destroyed blocks.

The features are a little tricky to get used to, but once you’ve played the game enough times, you should understand them enough.

If you like Jenga, then the chances are that you will find this Jenga “slot” rather entertaining. If you are a lover of genuine slot machine games, i.e. – one with reels and wilds, scatters and free spin bonuses – then you may not fall in love with Jenga as much as you might have thought.

Currenty there are no reviews for Jenga. Be the first one who will review it.