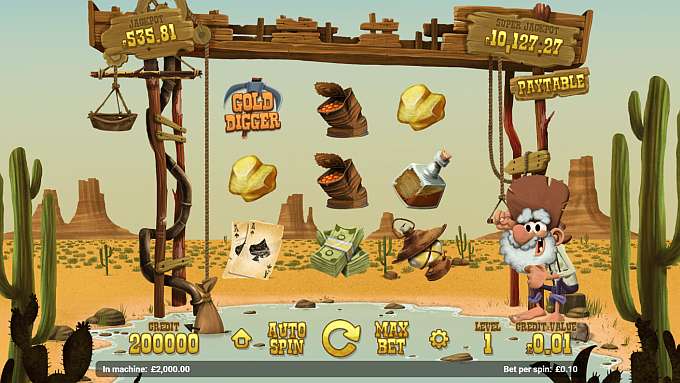 Gold Rush, or as it is known by its full title, Gold Rush: Valley of the Riches is a Magnet Gaming slot machine and one which takes players on a comedic adventure back to the days of gold mining in the American Wild West. Using clever 3D graphics and carrying two progressive jackpot prizes, there is a lot to like about this top title. Gold Rush isn’t your typical play-as- you-like kind of slot machine: none of the 8 paylines can be altered on the slot’s 3 reels, for instance. Coin values are also fixed at 0.01 in total. However, players are still entitled to adjust the number of coins they stake per line, from 1 up to 21. Being bizarre in the way its wagers are constructed only makes Gold Rush even more original, with bets stemming from a floor of 0.08 per spin, up to a ceiling of 10.00 a game in all. It doesn’t make much sense, but at least it is cheap.

Magnet Gaming aren’t particularly well-known for their overly extensive features, but those you can find in Gold Rush certainly do them credit. Of course, the highlight of this game is the twin-progressive jackpot prizes the slot carries. The smallest of this pair is worth 500 credits upwards, whilst the larger, fatter prize can go for 10,000 coins and up if it hasn’t been won for a considerable
period.

Landing 3 identical special symbols on a payline will trigger one of the special features in this slot, and there are a few of those to go around. That can be annoying (as bonus symbols which don’t trigger a feature just get in the way of a potentially winning combo) and landing 3 of them can be troublesome and challenging. It is rewarding if you can pull it off, though.

A Golden Canyon bonus can deliver petite but value winnings as you make your way through a canyon. Another instant win feature is available via the game’s Gold Digger bonus, allowing players to blow their way through the cliff face to potentially unlock big money jackpot prizes.

Other features have also been included in the Gold Rush game. For starters, there is a free spin feature. The Gold Fever bonus can see players bag 20 bonus spins, whilst the Game Flash feature sees players have the chance to hunt down those jackpots. Throw in a few multipliers to boot, and you’ve got a pretty decent and exciting title here.

Currenty there are no reviews for Gold Rush. Be the first one who will review it.