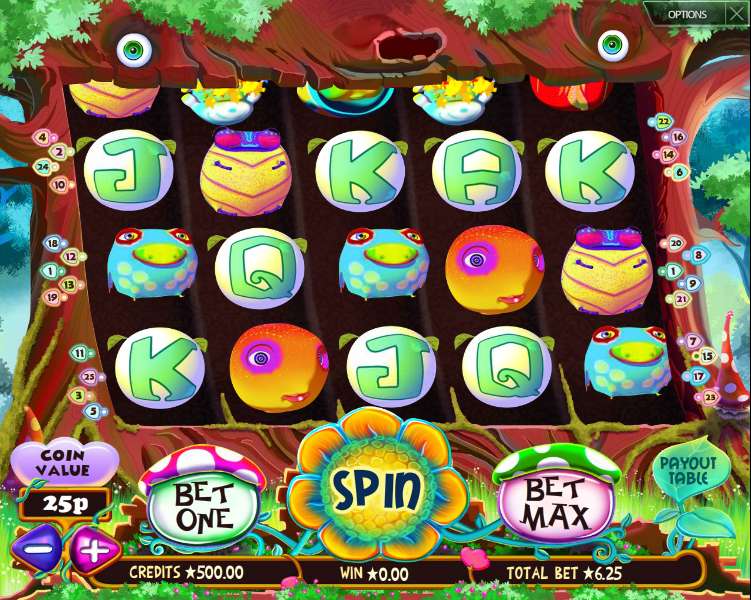 Designed and developed by MultiSlot, the Forest Fairies game should have a deep, woodland and fantasy theme, but, it is far more bizarre than that. There is precious little to do with fairies in this game, and the symbols on the reels are far more reminiscent of little monsters and critters. Graphically, the game is a bit of a bust, and the theme, in general, doesn’t evoke enthusiasm. Forest Fairies has a generic 5-reel, 25-line gaming structure, and the wagering options are certainly not as flexible as shoestring budget players would like, costing at least 1.25 per spin. For a 25-line slot, that’s expensive stuff. At the opposite end of the wagering range, the slot will set players back roughly 125.00 per spin, although its unlikely that there will be too many players eager to splash that sort of cash on this game, even if it does contain a non-progressive jackpot worth 5,000 coins.

That non-progressive jackpot can only be won when players land 5 of the wild symbols (a crab-like symbol) on any payline in the game. Wilds can also substitute for all other symbols barring bonus and scatter icons.

Scatter icons appear as multi-legged critters. These symbols can deliver paltry scattered wins worth 5x, 10x or 15x your total bet when 3, 4 or 5 of them appear anywhere on the reels during a single spin. Landing 3 or more of them will trigger a free spin bonus.

Bonus icons appear as fish-like beasties and landing any 3 of these on a payline (they are not scatters, so must appear on a line) will trigger a bonus round. Bonus symbols only appear on the second, third and fourth reels of the slot.

In the bonus round, players will get to select from a wide variety of flowers. Matching any 2 flowers will see players collect a cash prize.

As for the free spin bonus, players will start this feature with 5, 10 or 15 free spins, depending on whether they landed 3, 4 or 5 scatters. There is nothing overly special about how the free spin bonus is played. Players can spin the reels for free, although no multiplier or other goodies are handed out to players, or anything like that, which is a shame, to say the least.

Currenty there are no reviews for Forest Fairies. Be the first one who will review it.