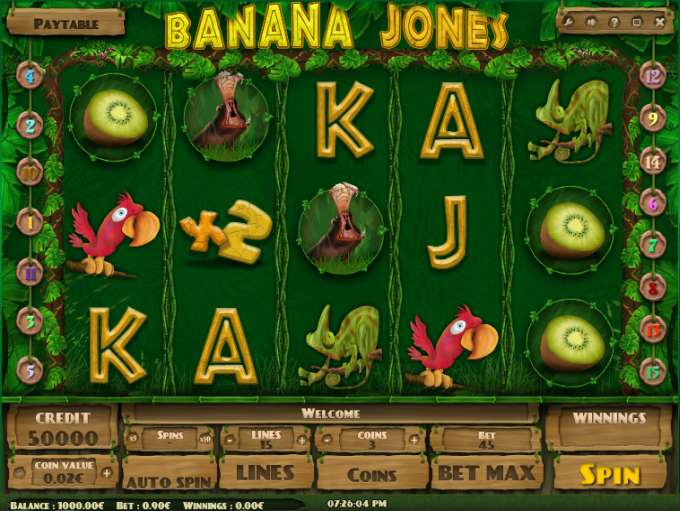 Imagine Indiana Jones as an ape, and you have pretty much got the gist of Banana Jones. This online video slot comes to the small screen (unless you have a large screen) from iSoftBet software developers. It is a five-reel, fifteen pay-line game with a generous betting range, starting at 0.02, and increasing incrementally up to a maximum of 2.00. With a maximum of three coins per line allowed on this slot, the top wager of 45 coins totals an amount of 90.00. This makes the game great for players with all kinds of budgets, if not a little low for the archetypical high roller. Don’t miss out on a spin of these reels, it guarantees great funwill be had by a winning player, with a maximum in game jackpot prize of up to 15000 coins.

Get ready for a trip into the deepest, darkest jungle with Banana Jones. This game features icons of the “wild” variety – chameleons, monkeys, hippopotamus, parrots, bunches of fruit including bananas, star fruit, pineapples and kiwis, a Wild leaf icon, and card indices rendered graphically in a rather wild style. Also find 4 x and 2 x multipliers randomly scattered around the game, and a scatter icon of a whole bunch of different fruit that can win up to to 25 x multipliers. The Wild leaf icon replaces all other icons except the scatter, and multipliers, while all icons animate too; even the card indices raise dust off the ground – it really is all rather charming.

Graphic rendering is very well done in a comic cartoon style that speaks of a good illustration team. Ambient sounds are appropriate too with a sort of steel band playing in the background, as well as animal-like sounds creeping in here and there. Reels are divided by streams of lianas, and leafy greenery weaves its way around a jungle-like backdrop, in what we could happily call a “green” game, and anything green is good.

It is unfortunate, but there does not seem to be any bonus feature that is specific to a separate game. Oddly enough this is the sort of online video slot that could really benefit from a bonus game, but sorry folks, not this time around. At least there are plenty of wilds, scatters and multipliers to make up for the lack of a bonus.

Currenty there are no reviews for Banana Jones. Be the first one who will review it.