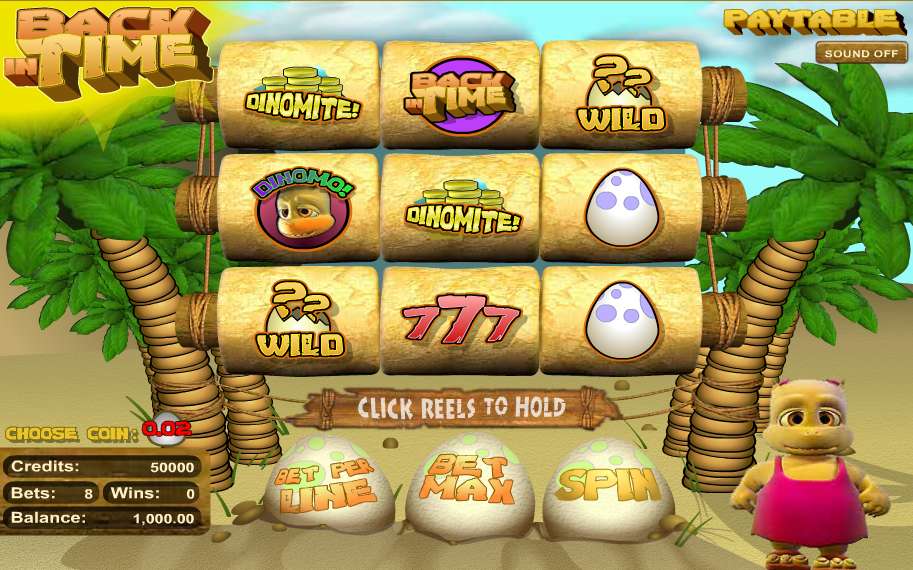 About Back in Time

There are a couple of different types of slots games that can be played online, we find three reel, four reel, and five reel games, and sometimes even more sophisticated than five reels. However, the three reel slot – no matter if it is found online or not – is always referred to as a “classic” slot game. Back in time is a three reel slot and therefore fits into the category of the “classic slot”.

This slot from BetSoft might have only three reels, but it also has eight pay lines. This makes it easier to win the top prize of 250 coins. Players are able to win vertically, horizontally and on the diagonal simultaneously, with a coin bet range of between 0.02 and 1.00. Wagers per line vary from zero (although why anyone would want to place a bet of nothing is quite beyond me), and forty coins.

There are lots of lovely features on this very cute slot; first it is based in the times of the dinosaur, with a sort of caveman theme. Reels are mounted to spin round logs of wood, set into a backdrop of primordial forest. It is graphically rendered in a kind of comic theme, but is also quite childishly illustrated, with a dinosaur in a pink dress, watching the reels as we spin. Ambient sounds are of a monotonous drum type beat, but this can be muted fortunately.

Other special features are the ability to hold winning icons, while spinning the rest of the reels. We are not really sure what dictates when we are able to do this, but it does take place quite a lot, and gives us some control over whether we win or not. A “hold” feature does not happen too often on an online slot, so do take advantage and don’t miss out.Icons are a Dinomo which is the dinosaur, Dino eggs with various coloured spots, a Dinomite icon, triple sevens, a Back in Time logo, a series of three rocks to trigger the bonus game, and an egg that has hatched a question mark which plays the wild symbol.

Sadly this writer did not manage to trigger the bonus game, so, knows basically nothing about it. However, playing was fun, winning was regular, and we hope that your luck holds out to get you into the bonus feature. Well, at least it will be a surprise!

Currenty there are no reviews for Back In Time. Be the first one who will review it.