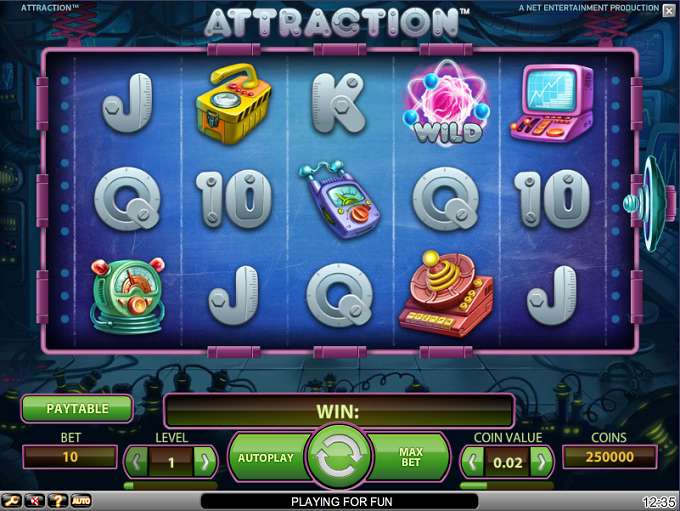 Net entertainment is the proud developer for this “magnetic attraction” themed online slot called what else, but - Attraction.  It is no secret that Net Entertainment is definitely one of my favourite developers, and a firm favourite with many other players too. Playing this five reel, ten fixed pay-line game, will hopefully magnetize a magnificent prize to you the player, but please bear in mind this is a non-progressive game.

Awesome illustrated icons are able to magnetise randomly during a spin in this super new release from August 2014. We have to admit that icons represent gadgets that we have absolutely no idea what they are, but they also represent fun, and fun is what playing online slots is all about. Presumably these are all gadgets that have everything to do with magnetic attraction. Balance of icons is made up of traditional card indices, all graphically rendered in (an excuse the pun) very attractive way. Ambient sounds are cool and don’t irritate that much, but may be silenced if the player requires.

This marvellous execution of NetEnt designer skill aims to entertain. Spin the reels and remember to be delighted when a little magnet symbol appears at the side or beneath the reels. This means that the slot is about to become even more attractive. It offers Wilds and Sticky Wilds which means that stacked sticky wilds are possible to create even more winning combinations.  More than one kind of jackpot combination can spin into live play.

A coin range starts at only 0.01, which as the pay lines are fixed, means a minimum bet of 0.10. Low enough to keep even the lowest budget player entertained for a good long while. Coin range size can be set by the player, and this make the game attractive for all kinds of risk takers.

Scatter and bonus symbols trigger Attractions’ bonus feature. These also appear at the side or under the reels, and offer a re-spins instead of free spins round. For example if a wild icon lands on the reels and a magnet appears beneath the row in which it appears, then, on re-spin is awarded. The same applies when a magnet appears at the site of the reels; this magnetic feature activates at the start of every spin and re-spin, so, for every re-spin, two magnets will activate, and so on.

Currenty there are no reviews for Attraction. Be the first one who will review it.