ALICE AND THE RED QUEEN

ALICE AND THE RED QUEEN 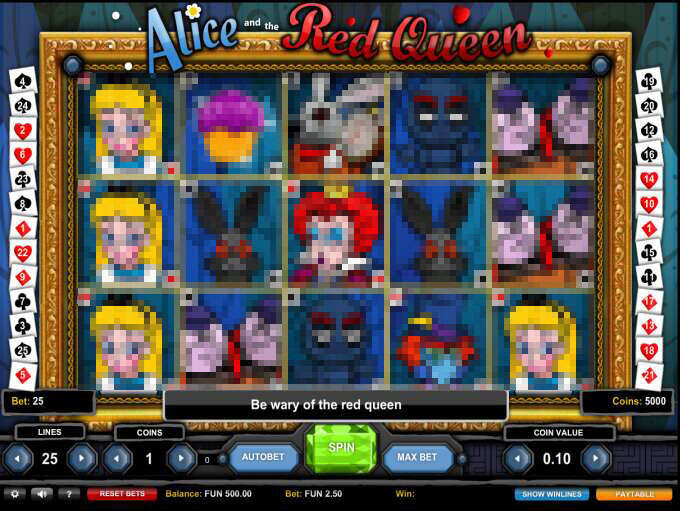 Alice and the Red Queen

About Alice and the Red Queen Slot

Alice and the Red Queen is a five reel, twenty-five pay-line video slot from the 1 x 2 Gaming stable. 1 x 2 gaming is new to this reviewer, however they are a UK-based provider of all kinds of online gambling games, and have been offering fixed odds games online since 2003. This video slot offers a top in game prize of 5 x multiplier for 750 coins, but also has loads of other ways to win too.

Graphically this is a very sound slot game that is power-packed with colourful quirky fun. It is of course themed on Alice’s trip into wonderland, so, we find many familiar characters playing the icons, including the March Hare, Tweedle-Dee, and Tweedle-Dum, the Inch Worm, White Rabbit, Cheshire Cat and Mad Hatter are all low paying icons. Alice, the Red Queen, Eat Me, and Drink Me icons are higher paying symbols, with Alice paying the most. The Wild Icon is simply the word “Wild” and can substitute for all other symbols except the scatter which is the Teapot.  This scatter also awards free spins.

Players are able to toggle the amount of lines to play one at a time between one and twenty-five. They are also able to play between one and five coins per line, in a coin bet range of between 0.01, and 0.50. This makes for a maximum wager of 125.00. This is pretty steep for a normal sort of slots player, but the fortunate thing is that low rollers can have a go at a much lower bet.

The scatter icon (Teapot) triggers a free spins feature, where up to fifteen free games can be won at one time. The teapot may land anywhere on the board to trigger the bonus game, and the more symbols that appear, the more free spins are awarded. During this game a “Cake” icon appears, and only during this feature. These do not need to match left to right like normal Icons, as long as it appears on an active pay-line, it will award a win. This symbol offers prizes of 12 for two cakes, 30 for three cakes, 100 for four cakes and 200 for five.

In addition symbols are all suited like in ma pack of cards. So, if symbols of the same suit land on an active pay-line, another bonus game appears. Basically the player lands a Flush, and is paid out with even more multipliers.

Currenty there are no reviews for Alice and the Red Queen. Be the first one who will review it.