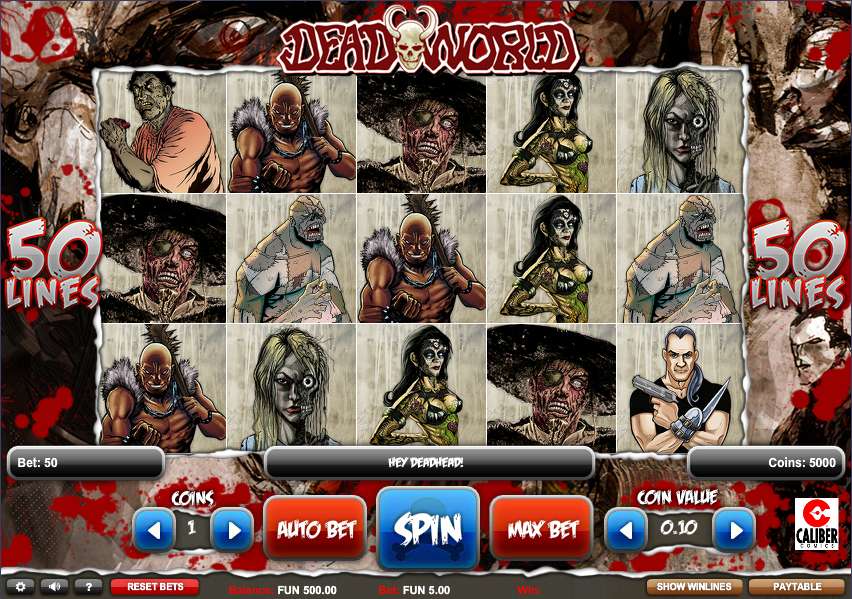 1x2 Gaming’s Dead World slot is a zombie themed title, and one which is impressively better than other similarly themed online gambling games. Dead World features 5 reels, and 50 paylines of flesh munching gore, with graphics that are far more realistic than many of the childish, comedic zombie themed slots on the market. Dead World allows players to choose coin sizes of 0.01 up to 0.50, whilst they can also opt to bet up to 5 coins per line, too. The number of paylines playable in this slot is fixed, giving Dead World minimum and maximum wagers of 0.50 and 125.00 per spin, respectively.

Players should keep an eye out for the skeleton icon in Dead World. This icon is the best paying symbol in the game, and when it appears, it can offer players maximum wins of 90, 200, or 500 coins, for 3, 4 or 5 such symbols appearing in a winning combination.

A shapely zombie lady happens to be a wild symbol in this slot. Wilds can replace all other icons in the game, excluding bonus symbols. Delirious wild symbols don’t really offer any winnings on their own, so you’ll need to bag them in a winning combination for them to be of use.

The crazy claw scratching zombie (known as Hagravena) acts as the bonus symbol in Dead World. If a player bags 3, 4 or 5 of these icons anywhere on the reels, they will be able to pocketed scattered wins of 20x, 50x or 300x their total win line bet. In all honesty, it isn’t much of a bonus round, although it does still have the potential to keep you flush with credits whilst playing this slot game.

Dead World is certainly one of the better looking zombie themed slots out on the net, although it doesn’t do much for you in the way of gameplay. It is basic, it is simple, and it should be ideal for all players to sit down and play, no matter how experienced they are at playing online video slots.

Currenty there are no reviews for Deadworld. Be the first one who will review it.