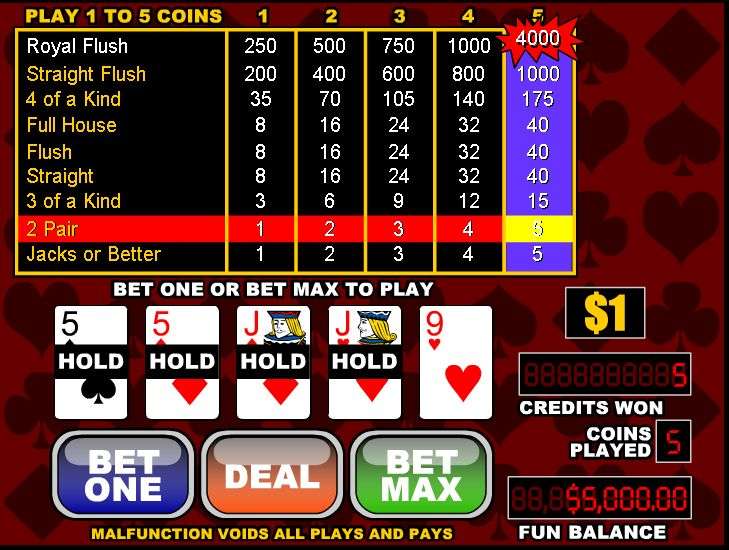 New Customer Offer. T&C’s Apply. 18+. The Promotion consists of one (1) 125% match bonus up to $1,250, and is valid only on a player’s first deposit; it consists of two (2) subsequent 125% match bonuses up to $1,250 each, valid only on a player’s next two deposits.The deposit bonuses are only available by using Bitcoin or Bitcoin Cash. Bonus funds cannot be used for play on Live Dealer games.

About Classic Jacks Or Better

Jacks or Better is the standard game used in video poker. There are now many variations of the format, but this game, which requires you to get at least a pair of Jacks to collect, is the game that all of the others are measured against. The pay tables in the other games, whether they use some type of joker or make some other change, are adjusted according to the standards of the classic Jacks Or Better game.

You may have played so much Jacks Or Better video poker that you may not notice some of the particulars of the game. It is actually a game of draw poker, with five cards dealt and then held or discarded. While Texas Hold 'em, Seven Card Stud and Omaha are more popular types of poker in both live casinos and online, those games are better suited for competitions between players. Draw poker works best for video poker because it is the best way for the player to come up with a hand to play against a standard. You don't have to worry about beating or bluffing any opponent, you just have to come up with a hand that is at least a pair of Jacks.

Quite often you have a choice after you are dealt five cards. You may have a low pair and a Jack or better in your hand. The question is, should you discard your pair and just hold on to your Ace or face card? Usually, holding the low pair gives you your best chance, unless the high cards on the board might also form a flush.

One strategy which seems to rarely work is discarding a pair to go after a straight. The card you're looking for seems to never show up in Jacks or Better or virtually any other type of Video Poker game.

Most Classic Jacks or Better games now include a bonus or special feature known as the gamble game. In the past, you might have been shown one card and then had to decide if a second card was higher or lower. Nowadays, that game now seems to be rarely available online. The normal Double-up game shows one card face-up and then gives you a choice of four others. Pick one that is higher than the face-up card and you'll double your money.

i just started but i like it vary much

No downloads for video poker.