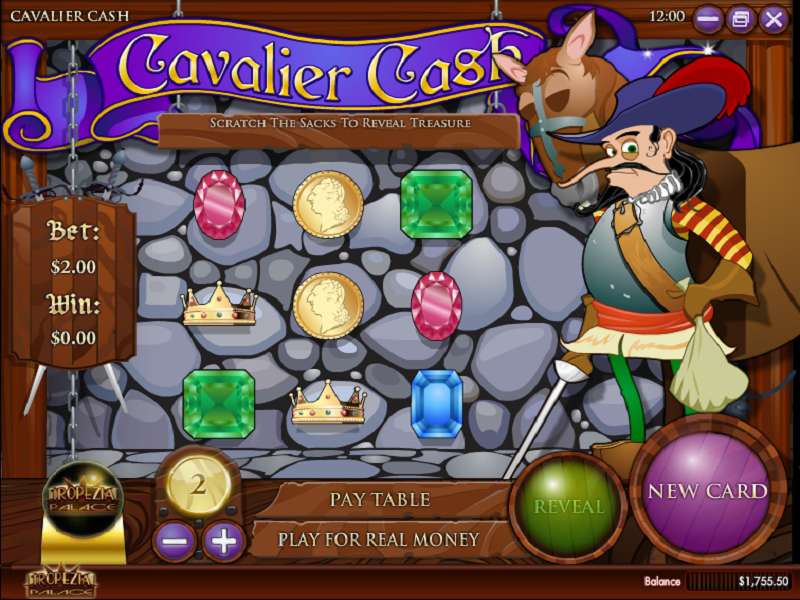 Cavalier Cash is an instant win, scratch card game that is mildly animated, and tries to offer you something which other online scratch cards don’t. The cavalier to the right of the screen will cut down the roof dropping money sacks on the screen. It doesn’t take a rocket scientist to figure out what you are supposed to do with those sacks, as you try and win a non-progressive jackpot.

One the aforementioned Cavalier has cut down the money sacks, they will be sitting on your screen, forming your scratch card. Nine sacks in total are present, and player must wave the mouse over each sack to reveals its contents. If you’re in a rush, you can click on the “reveal” button, to speed along this process. Inside the sacks are various items, such as jewels, crowns, golden cups, and more. If a player matches three identical icons, then they will pocket a win from the pay-table.

Cavalier Cash is cheap to play. At its cheapest, you can actually play it for just 0.01 per card. That makes it a penny game, and one that is ideal for all players operating on shoe-string budgets. Alternatively, you can stake as much as 100.00 per card. This gives the scratch card one of the biggest wagering ranges of any instant win game.

Matching 3 of the ruby, sapphire or emerald icons will see you net wins of 1x, 2x, or 3x your bet, respectively. If you were to match 3 coins you’d win 10x your bet. A prize of 20x your bet is available for matching 3 golden cups, whilst matching 3 crowns will see you net the maximum jackpot of 50x your total bet. That isn’t too bad a prize for an online scratch card game.

The wagering range in this game makes Cavalier Cash appealing to all. You might argue that it is rather primitive, but name an online scratch card which isn’t. One point of note about Cavalier Cash, is that it is jumpy. Sometimes, Rival Gaming’s instant win game may jump about the screen, in a sort of glitch, with patches of black appearing on the screen. This is small issue and doesn’t really interfere with gameplay, so you needn’t give it much thought. It is worth mentioning, though, so as to clam players who think there is a genuine problem with the game.

Currenty there are no reviews for Cavalier Cash. Be the first one who will review it.