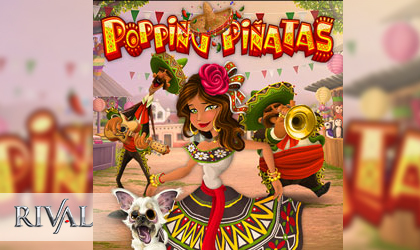 Rival, a software provider that delivers cinematic slots to the iGaming industry, has announced the release of a new title – Popping Piñatas. The game takes…

…players into an immersive world of Mexican celebrations that is packed to the gills with awesome graphics as well as potentially lucrative features!

A Taste of Mexico:

This latest title is heavily inspired by Mexico and the festivities often associated with this country’s culture. Even though Piñatas aren’t necessarily only found in Mexico, it is the first country that…

…comes to mind when piñatas are discussed. As far as the visual side of the game goes, this one is a handful, to say the least. The brand’s creative team went above and beyond with the theme, putting together a truly immersive experience for their players.

Once fired up, the slot takes players into a little Mexican town, set up to celebrate what we can only assume is a holiday of some sort. In the foreground, there are two mariachis playing their instruments, while a mysterious yet gorgeous singer/dancer makes her appearance depending on what happens on the reels.

One thing that truly adds to the immersion is the level of animation. Just about everything you see on the screen is animated, including the lights that turn on if you activate certain features or the puppy that jumps from the reels and joins the mariachis.

Features to Seal the Deal:

Despite being downright visually stunning, having awesome graphics doesn’t make for a good slot game. It takes a little bit more than that. The developer has gone with a 5x3 grid that runs on 50 fixed paylines. There are two…

…tiers of symbols, with the lowest symbol yielding 25 credits while the highest one can bring up to 2500 credits. As far as special features go, it features…

There are also Day Bonus rounds and Night Bonus rounds that offer anywhere from 3 to 5 bonus spins depending on their luck.

Rival Powered is a software studio founded in early 2000s with the goal of providing the market with high-quality slot games and other content. Officially starting their production in 2006 upon receiving all of the necessary licenses, it has since created over 260 unique games. Their specialty are cinematic user experiences that go way beyond a simple slot game.

The team behind this brand is dedicated to pushing the boundaries of quality and immersion with their innovative technologies. At the moment, it enjoys a massive network of distributors who are delivering their content to key regulated markets all around the world.