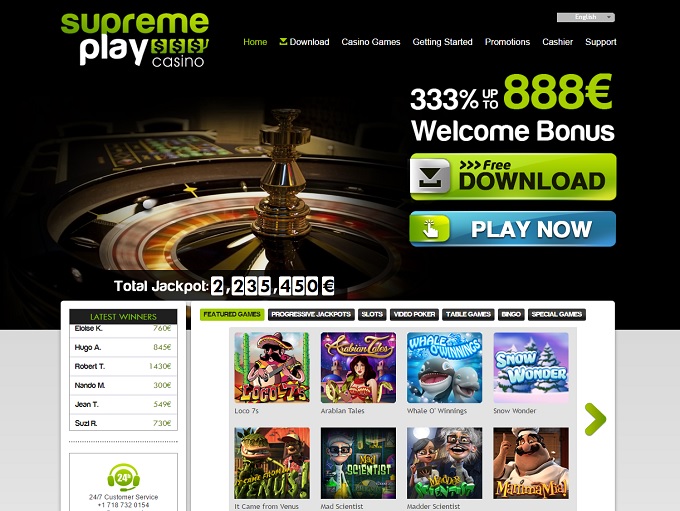 In our experience, Supreme Play is the worst casino we’re come across. Operated by Cyberrock Entertainment N.V., they are registered under the jurisdiction of Curacao but the identity of the actual master licence holder is kept secret. There has so far been no success in contacting their regulator when players need to have arbitration or resolve their complaints.

The company is part of the BestPay Partners group who took part in unethical business practices by taking advantage when another affiliate hacked into other sites and put unpaid advertising links there without permission. These sites were not compensated for the legal advertising and this took place over a period of months. The BestPay Partners group members continued to take on new accounts well after the other affiliates took corrective action.

The biggest issues that players experience extremely long delays in receiving the money and quite often they are not paid out their winnings. Not only can the support staff be extremely rude but there are examples of management themselves sending highly unpleasant emails. Supreme Play has even threatened and abused online forums for the reporting of their players’ matters, which have resulted in a number of sites putting them on blacklist.

They have some of the worst and most player and friendly terms and conditions of online casinos that we have seen. For example, deposits of $/€/£249 or less are multiplied by 10 and that is the maximum amount that you can withdraw from this casino. The rest of the balance is considered null and void and is immediately removed from a player’s account. Withdrawal requests take on average 15 - 18 working days and that only begins when the authorization process has been completed successfully; furthermore the Fraud department has to give their okay as well.

Any player who does not gamble on the site for periods of 90 days will lose all the funds to the casino. And if you think that’s unfair then this condition trumps all the above. As from the website: “The Casino reserves the right to change, add or subtract from the games and / or services it offers, at any time, without prior announcement or update. Terms and conditions may be changed or altered and the player accepts this as part of the prerogative of the website to do so when and if necessary.” Again we recommend that you steer clear of Supreme Play.

Supreme Play has a wide variety of slots including 3-reel, I-slots, video and 3-D. They only have four progressive jackpots. Video poker is fairly well supported and is available in both single- and multi-hand varieties. The offering is rounded off with standard table games, bingo and even specialty games, few of which you’re unlikely to find anywhere else.

Currenty there are no reviews for Supreme Play. Be the first one who will review it.