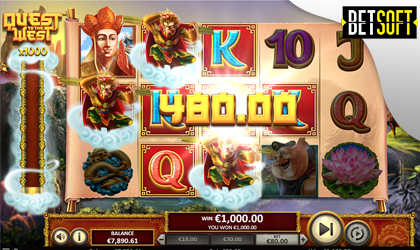 Betsoft, a popular software provider, has announced the release of a brand-new game titled Quest to the West.

Inspired by one of the most legendary tales to come…

…out of Asia, this game is packing all kinds of features. Players who are lucky enough can expect experience potentially massive wins.

From East to West:

This latest slot is all about one of the most popular Chinese legends – the Monkey King. The game brings a perfect balance between immersive graphics and potentially lucrative features.

The background for this game is highly detailed. It’s no secret that the team behind the developer went all out on this one.

…a slot game. The view depicts a borderline magical sight that features a golden castle, a waterfall, and a massive valley. Everything is animated, giving the image plenty of depth. Symbols share some of that quality as well.

They come in two tiers – the lower-paying card royals and the higher paying characters. The latter include the Monkey King himself, his companions, and his adversaries. Overall, the visuals are absolutely this game’s strong side.

When Less is More:

One of the most interesting qualities of the new title is its ability to bring more with less.

…packs only one! There’s the bonus spin mode that is triggered when 3 or more Monkey King wilds are collected. During this game mode, players will collect Monkey King symbols. Those who collect 15 or more are treated with an instant win and the 1000x multiplier on their stake!

Annamaria Anastasi, Marketing Director of Betsoft Gaming, shared her take: “The Betsoft team are highly skilled at taking a popular theme and giving it a unique ‘twist.’ This skill is one of our hallmarks and Quest to the West is a fantastic example. Player response has been hugely positive and we anticipate this game will become a fast favorite.”

Betsoft is a premier software provider known for its innovative titles. The company was founded in 2006 with the goal of reaching new standards of quality when it comes to slots and other gaming content. Its entire portfolio is packed with games that are above the average in just about any way. The team behind the brand is known for taking the extra step when it comes to utilizing 3D graphics, advanced animations and generally creating a cinematic experience.

Over time, the company has built a massive network of distributors who operate in a variety of key regulated markets.