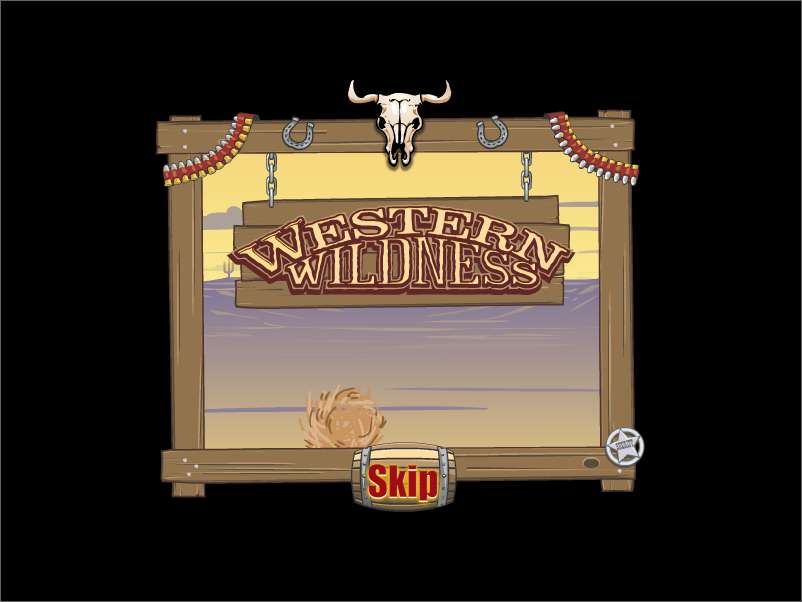 Western Wildness is a Rival Gaming developed slot machine and one which is particularly big with players based in the USA. This Wild West-themed slot machine offers up 20 paylines over its 5 reels, with players able to select coin values which stem from 0.01 up to 0.25 in all. Players will be able to select up to 10 coins per payline, and all 20 paylines are fully adjustable in the cartoon-style slot machine game. Expect to be able to stake anything from a floor of just 0.01 per line per spin on the game, whilst if you’ve got plenty of cash to spare, you can wager as much as 50.00 a game on this slot. Prizes are a little bit on the poor side in the Western Wildness. Players can expect to be able to win as much as 500 coins at most, and to do so they will need to land 5 of the jackpot chest icons on any active payline, which is no small feat.

Wild symbols appear as wagon wheels. These symbols can not only substitute for all standard paying icons in the game, but they can also double the value of all winning combinations in which they play a part. That’s not all, though. As well as that, wild symbols which appear in winning combos can expand to occupy whole reels, potentially opening more winning lines to players. The bad news? Wild symbols only appear on the first reel in this game.

Scatter icons appear as shotguns. These shotguns can trigger a free spin bonus round, but only when 3 or more of them appear anywhere on the reels.

Bonus icons appear as cattle skulls. These symbols can trigger a little bonus round when 3 or more of them land anywhere on the reels. In the bonus, players will basically pocket an instant win cash prize for their efforts.

Now, back to the free spin bonus feature. In this round, players will start with either 10, 20 or 100 free spins, depending on whether they landed 3, 4 or 5 scatters in the base game. In the feature, any winnings you pocket will be tripled courtesy of a 3x multiplier. This bonus is easily one of the best we’ve ever seen in any Rival Gaming developed slot.

Currenty there are no reviews for Western Wildness. Be the first one who will review it.