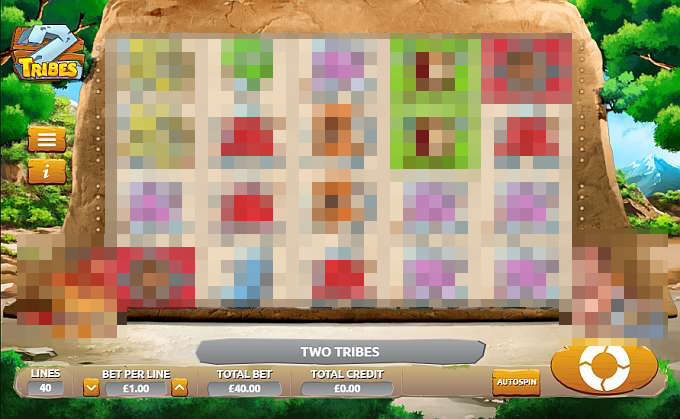 Two Tribes is a cartoony but comical themed slot machine game from The Games Company. The slot dishes up various combative imagery, such as swords and shields, with a wizard and his followers animated at the bottom of the reels, adding to the thematic tone of the game. Two Tribes offers 5 reels and 40 paylines to players, with line bets ranging from a floor of 0.01 up to 10,000.00 per line. As you can imagine, this creates one of the largest wagering ranges yet to be found in an online slot, with total stakes ranging from a none-too-cheap 0.40 per spin up to a positively bank-busting 400,000.00 per spin. The top prize in Two Tribes is non-progressive and is capped at 200x your total stake in all. This is won if players land 5 of the golden shield and arrow symbols on any payline in the game.

Landing wild symbols on the reels will see them substitute for any other symbols without exception. There are two of these for players to get to grips with. The first of them is the standard wild, and it can also be used to win a non-progressive jackpot prize if 5 appear on a line.

A few modifiers are also present in this game, but they represent the only bonus features that the slot has to offer players.

If a dragon or a skeleton attack a tribe, then extra wilds can be added to the reels in their wake. Just like the other wilds, these can substitute for all other icons. Should a king or a caveman attack a tribe, then they leave behind expanding symbols. These symbols could be anything at all and expand to cover surrounding symbols, too. They have more in common with colossal symbols than true expanding icons, and they, too, can result in big wins being paid.

Save for the surplus of wilds and expanding symbols, there are no other bonus features included in this slot, which is a bit of a shame, to say the least.

Currenty there are no reviews for Two Tribes. Be the first one who will review it.