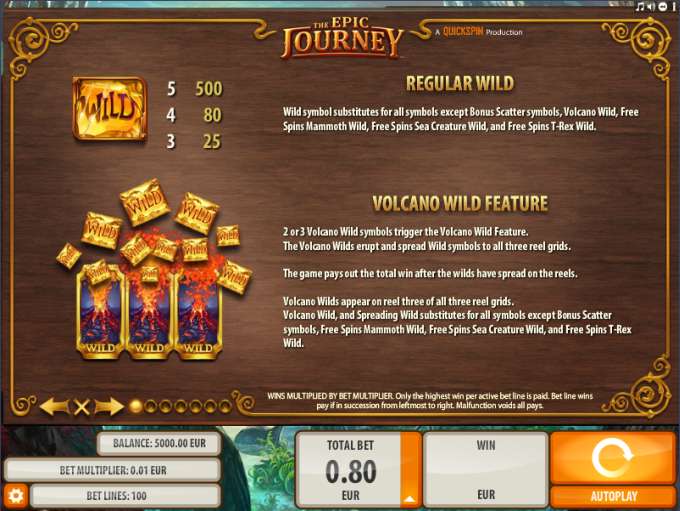 About The Epic Journey

Let’s be perfectly fair here. The Epic Journey slot is really a Journey to the Centre of the Earth themed game, isn’t it? It certainly has all of the hallmarks of that famous Jules Verne tale, and somewhat unsuccessful Hollywood movie. The Epic Journey has dinosaurs, it has monsters, it has giant mushrooms, and active volcanos. There isn’t really anything else it could be themed on. The Epic Journey has been designed and developed by Quickspin, and features an interesting setup. There are 5 main reels, but there are also 3 reel sets in total. This might make you think that wagering will be complicated, but it won’t be. Wagers range from 0.80 per spin, up to 80.00 per spin, with all of the reel sets activated. As is often the case with Quickspin slots, the top non-progressive jackpot is fixed at 500 coins.

A regular wild takes the shape of a piece of gold in this game. It is the top paying symbol, and it can replace all other icons save for bonus icons, and the many other types of wilds which you can land in this game.

The first of these additional wilds is the Volcano WIld feature. Land these stacked symbols on the third reel of any grid set, and you will notice that they spread wilds to other reels in the game, and to other reel grids.

If a player lands 3 of the rocket style icons, they will trigger a bonus pick screen. On this screen, players can choose from a series of runes to land either the Safari Free Spin bonus, the Fossil Hunt bonus, Mushroom Forest bonus, or an instant win cash prize.

The Mushroom Forest bonus allows you to pick from a number of mushrooms to win a cash prize and multiplier, whilst the Fossil Hunt bonus lets you take 3 spins to collect as many shovels as you can. Those shovels can then be used to pocket fossils to win cash prizes. Naturally, the Coin Win bonus is a simple pick and win game, involving runes and instant cash prizes.

Currenty there are no reviews for The Epic Journey. Be the first one who will review it.