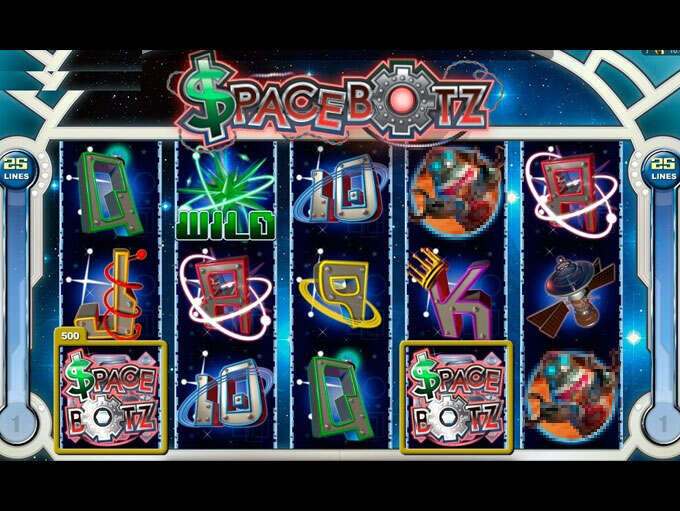 Genesis Gaming’s SpaceBotz is a futuristic, space-aged themed slot machine, and one which primarily looks as robots in space. The slot machine is pretty elementary in terms of both graphics and design, and players shouldn’t get too bogged down in the details of this slot, there isn’t too much on offer. SpaceBotz can be played over 5 reels and 25 lines, with players able to choose how many of those lines they wish to play with. SpaceBotz can see players choose coin values which stem from 0.01 up to 1.00, and they can bet as many as 10 of those per payline. Wagers are going to stretch from 0.01 per line per spin, up to 250.00 a spin on this game. With a good run of form, it is possible for players to pocket wins worth as much as 1,000 coins in this slot. To bag those prizes, they are going to need to land 5 wilds on a payline.

Aside from dishing out non-progressive prizes, the wild symbols in this slot (which appear as atom symbols) can also substitute for all standard paying symbols in the game. They are unable to replace scatters. Wilds are basic in this slot machine, at least until you trigger SpaceBotz’s free spins bonus feature.

Scatter symbols appear as the SpaceBotz logo, and landing these anywhere on the reels will dish out multipliers against the total amount you have wagered, resulting in some nifty enough wins. Scatters are also capable of triggering a free spins bonus round in the SpaceBotz slot machine game.

Once players have managed to land 3 of the SpaceBotz logos on the reels, they will trigger a free spins bonus round. In this free spin bonus round, any robot symbols which appear on the reels will automatically become wild symbols, this can greatly help players land more than average wins on the reels of the game. Players will start the bonus with a total of 5 free spins, but the feature can be retriggered by landing 3 or more of the scatter icons on the reels whilst the bonus is in session.

Currenty there are no reviews for Spacebotz. Be the first one who will review it.