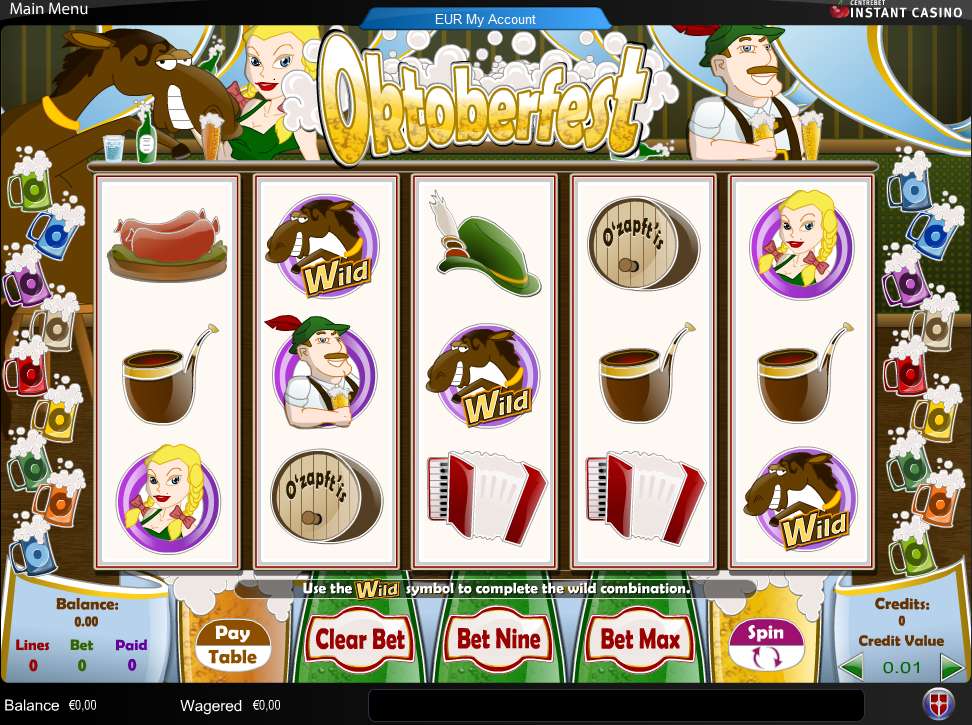 Produced by Amaya Gaming, players will need to introduction to the theme of the Oktoberfest slot. The title of this game says it all. Oktoberfest dishes out predictable but welcome symbols on the reels, all of which befits its theme. The game offers up just 9 paylines, with players able to alter those lines as they play. Players can also adjust their coin values, which range from 0.01 up to 5.00 in all. Players will end up wagering anything from a base minimum of 0.01 per line per spin, up to a capped maximum of 45.00 per spin. The non-progressive jackpot which Oktoberfest carries is actually rather decent considering the cheap wagering range. Players who land 5 wild symbols on a payline can expect to win as much as 5,000 coins with this non-progressive jackpot.

Wild symbols appear as horse symbols, and if you are fortunate enough to land 5 of these icons on the reels, you will win the non-progressive jackpot, as mentioned. Players will also note that wild symbols are not as efficient in this slot as you might like. For instance, wild symbols can only substitute for the beer wench and the drinker icons. They are useless to assist in bagging lower- paying combos.

As for other special icons, these appear as various beverages. When players land 3 or more beer, wine or cocktail symbols on adjacent reels, a Beer Barrel Bonus feature begins.

Players will get to play the bonus round with multipliers, depending on how many bonus icons they were able to land on the reels. Finding 3 of the same bonus symbols will offer a 1x multiplier but landing 4 or 5 of them will offer 2x and 3x multipliers, respectively. However, when the bonus round begins, players can click on the barrel to win instant cash prizes. They may also land additional multipliers (worth up to 5x) via the barrels. Players can keep pocketing cash prizes which are then multiplied by any bonus multipliers they locate, with those figures then multiplied by the win multiplier offered via the scatters. Decent wins worth up to 2,700 coins can be had via this feature.

Currenty there are no reviews for Oktoberfest. Be the first one who will review it.