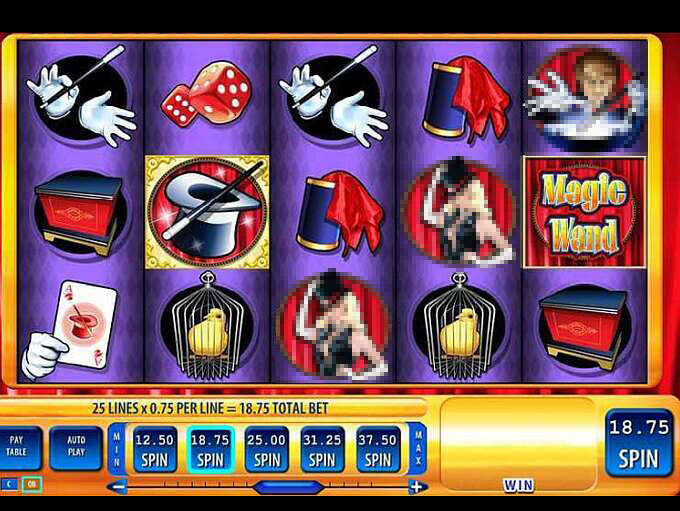 This WMS slot takes you onstage to a performance by a magician, with almost everyone of his tricks incorporated into the game. WMS has tried to recreate a theatrical setting for Magic Wand Slots, with the game board laying underneath a large stage curtain. There is upbeat music playing at all times and it gets faster when you have a winning spin.

The magician's symbols you'll find in this game include a deck of cards, a pair of dice, two white gloves, a handkerchief, a lock and a bird in a cage. Another symbol is the blonde Magician's Assistant who is adorned in a top hat.

Unlike most slot games, there is only one symbol from a deck of cards used in Magic Wand, It is an Ace of Hearts and appropriately, it is being held up by the magician's hand.

The Wild symbol in the game is the Magic Wand Logo. Get five of them on one line and you'll win the game's biggest prize, 7,500 coins. The Magician's Hat operates as the game's Scatter symbol. Get at least three of them and you'll be getting free spins that should be quite lucrative.

Your best chance of winning at Magic Wand Slots comes when you reach the bonus round, which includes some especially favourable rules that can enhance your returns. One other way to make a great deal of money in this game is with the WMS progressive jackpot, which is awarded at random at any time.

When the Progressive Jackpot game is triggered, you'll get your choice of 30 different boxes. You'll win the prize in the box you choose and you're guaranteed to win at least one of four progressive jackpots.

During every free spin, two random reels will turn totally Wild. If they happen to be on reels 1, 2 or 3, you're guaranteed at least three winning lines and probably many more.

Currenty there are no reviews for Magic Wand. Be the first one who will review it.