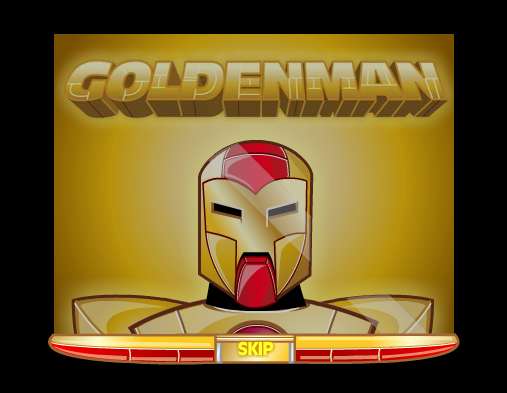 There are no prizes for guessing the theme of this slot machine game. Whilst Playtech had the license to the Iron Man franchise, that hasn’t stopped Rival Gaming developing their own knock-off version of the same superhero franchise. Known as Golden Man, the evidence for the inspiration behind this slot is apparent all-around. Golden Man is played over the standard 5-reel, 20-line format, with players able to select coin sizes which range from 0.01 up to 0.25, and bet as many as 10 of those coins per line. Expect to be able to adjust the paylines in this slot, and that will see you able to wager anything from a base minimum of 0.01 per line per spin, up to a capped maximum of 50.00 per spin. Landing 5 wild symbols on any active payline in this game can see you win a modest 500-coin non-progressive jackpot.

Golden Man contains the face of the hero as its wild symbol. These are expanding wilds in this game, although they can only appear on the first reel of the base game. Expanding wilds are also the top paying symbols in this slot and can bolster your wins when they do appear. Wilds can substitute for all symbols bar the bonus and scatter icons.

As for other special symbols, there are two. The free spins icon displays the hand of the Golden Man hero. These symbols can trigger a free spins feature when 3 appear on the reels of the slot.

Bonus icons appear as flying Golden Man symbols. These can also trigger a bonus round when 3 or more appear in any positions on the reels during a base game spin.

The free spins bonus feature triggered via the scatters can offer you a total of 15 free games. During that feature, all wins will be doubled courtesy of a 2x multiplier. There are other perks, though. Players will note that expanding wilds also appear on the second and third reels during this feature, as well as the default first reel.

The second bonus in this game allows players to take on the role of Golden Man and shoot to win cash prizes. This is very reminiscent of the bonus feature in Playtech’s now defunct Iron Man slot machine game, and is further evidence of the inspiration behind this game’s theme, as if more was needed.

Currenty there are no reviews for Golden Man. Be the first one who will review it.