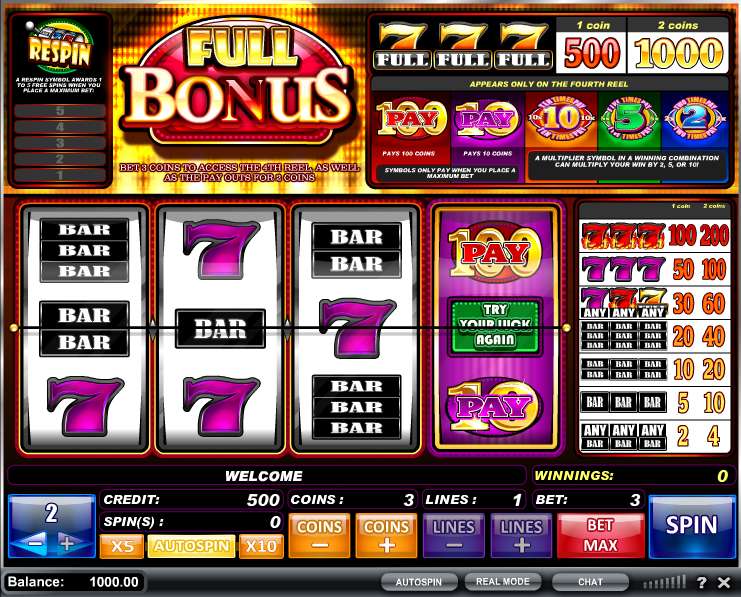 The Full Bonus slot machine contains the rather unusual number of 4 reels. Make no mistake about it, though, this is still a classic slot machine. The main reason for this is that there are actually only 3 standard reels in the slot, with the fourth being a bonus reel. Players can freely adjust the value of their coins in this slot, from 0.02 up to 2.00, and they can bet anything from 1 to 3 coins per spin, although there is only 1 payline spread across the reels of this slot. Wagers cost anything from 0.02 per spin up to 6.00 per spin on this slot, but unlike other classic slots, there is a handful of features which may be worth a look for you. Full Bonus also contains a top prize worth 1,000 coins.

The bar symbols are worth the least in the slot, and they can see players win anything from 2 to 40 coins if 3 appear on the reels. Single, double and triple bars are represented. Players can also pocket wins worth between 30 and 60 coins for any 3 sevens appear on the game’s payline, and wins ranging from 50 to 100 coins if 3 purple sevens appear. Landing 3 of the red flaming sevens on the line will see players win between 100 and 200 coins.

Players who land re-spin symbols on the reels can pocket a free re-spin, as indicated on the meter above the reels in the top left-hand corner of the screen.

The best symbols in the slot are the 7 Full symbols. These symbols are rare, but when they do appear on the payline you can bag pretty big wins. Landing three of them on the game’s single payline can see you win 500 coins on a single coin bet. Bag the same symbols with the maximum coin-bet wagered, and you could walk away with a non-progressive jackpot which is capped at 1,000 coins.

Currenty there are no reviews for Full Bonus. Be the first one who will review it.