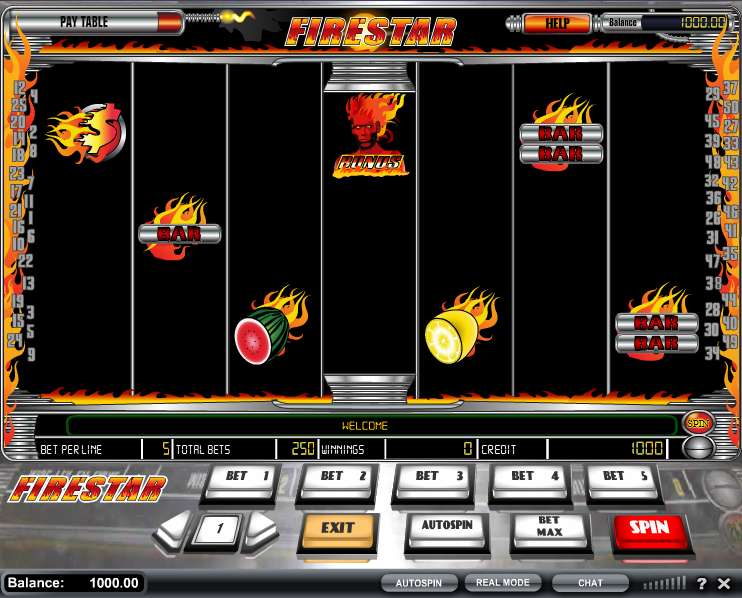 Firestar is a super hero bathed in flames and looks very much like Marvel’s Human Torch or DC Comics Firestorm, who appeared in 1978. The whole layout of the slot looks very 80s, from the flaming frame to the almost pixelated looking symbols and the chunky bet, spin and other operating buttons.

Three things really catch one’s attention when playing Firestar; firstly it has an unusual number of reels, seven in total. Secondly, it runs with 50 pay lines which cannot be adjusted and the way it works is by having 25 of them working from left to right, while the other 25 run from  right to left.

Thirdly not all the spaces on the reels are filled so there are gapes in-between. Surprising even with the gaps the chances of hitting a combination are still pretty good.

Firestar has a quite a few special symbols that can change the basic gameplay dynamic and really heat things up to make them interesting.

If you see the Radiation sign it will trigger the toxic waste bonus which is a fixed cash prize. It will always be in the centre reel.

To bolster your winnings there are 2, 3, 5 and 10x multipliers which need to form part of a pay line in order to increase the winning amount.

Next is a “Free Games” symbol that only appears in the middle row. If chance is on your side and three appear you win up to 10 free spins which will light up anyone’s day. The free spins will not retrigger.

Lastly there’s a WILD symbol which is broken out of the ice and it helps to stand in and create combinations of three signs. Wilds also double the winnings of the symbols it is matching.

When you land the Firestar BONUS symbol in the middle reel it activates the mini game whereby you have to shoots bolts of flame at the evil Ice Man and break open the cracks in his ice in order to take away his energy sources but beware the Collect sign as this will end the feature early. As exciting as the game is, it does not seem to give out as much of a bonus as we would expect in the end. Once the reward is collected the main game is continued.

Currenty there are no reviews for Firestar. Be the first one who will review it.