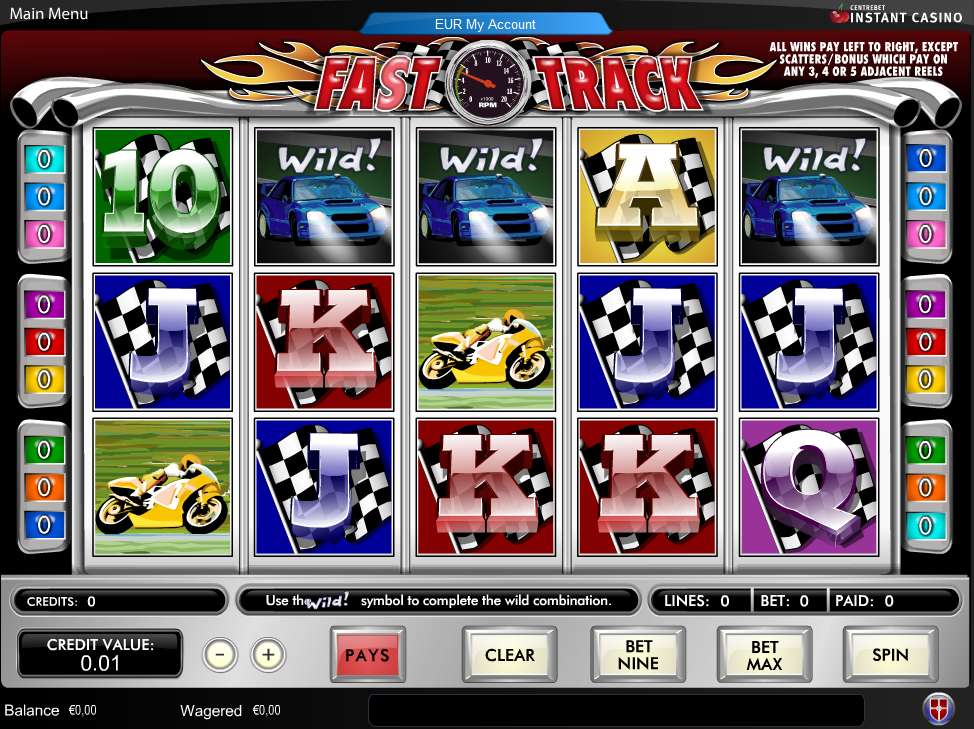 Fast Track is a racing themed video slot from Amaya Gaming. It encompasses all motorsports, really, including touring car racing, Formula One, and motorcycling. Despite this broad sweep of sports, Fast Track is still a somewhat generic racing themed slot game, with a simplistic and basic design, spread over 5 reels and just 9 paylines.

At the bottom of the reels, players can choose credit values which range from a low of 0.01 up to a high of no more than 5.00 per coin. They can choose how many paylines they wish to bet on, and how many coins they wish to stake per line (with up to 5 being permissible). This will rapidly alter the amount you wager from a floor bet of just 0.01 per line, per spin, up to a ceiling bet which is fixed at a whopping 225.00 per spin. Nobody is going to want to wager that kind of cash on such a basic slot as this.

The touring car is the wild symbol in the Fast Track slot. It is capable of appearing on all of the reels of the game, and can replace Formula One or motorcycle symbols in this slot. It cannot replace other icons, which is a shame and makes its rather useless if we’re being totally honest.

Three different bonus feature icons star in this slot. Land three of the same ones to trigger a feature. Those symbols include the Mystery Scatter, Speed Scatter, and typical bonus icons.

Should you land 3 of either the Mystery or Speed scatter icons, then you will pocket an instant win bonus, which is immediately added to your account. These are very simple bonus features, and in fact they simply act as scatter paying icons and nothing else.

The real bonus icon is the one which is called “bonus”. Land this symbol and you can trigger the Track Pick bonus round. In this feature, you can choose from 12 tracks. If you place first, second or third (at random) then you bag a multiplier worth 5x, 2x, or 1x, respectively. You need to work your way through the tracks bagging multipliers until a collect sign appear, after which your multiplier is applied to your total stake to give you a total cash win for the Track Pick Bonus.

Currenty there are no reviews for Fast Track. Be the first one who will review it.