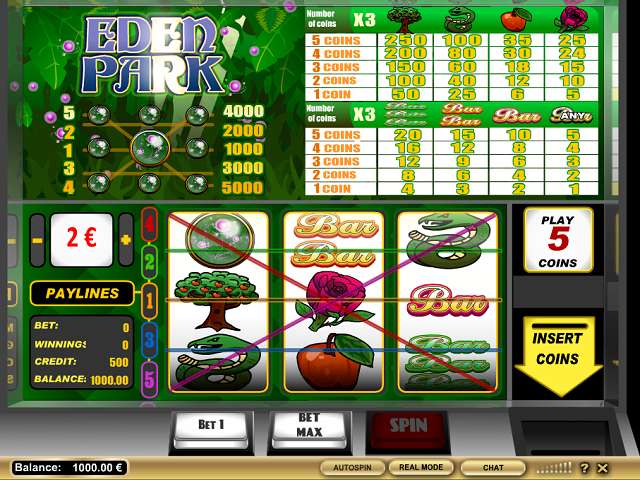 Well the name says it all regarding this online slot brought to us from iSoftBet. It is a garden themed game which features many of the items purported to have been found in the mythical Garden of Eden. There are three reels and five pay-lines which categorises the game as a “classic slot” – basically what this means is that it is reminiscent of a one-armed-bandit except there are no  cherries, so other fruits have to suffice.

Find a wide coin range – from €0.02, all the way up to a maximum of €2, and three coins maximum per line. This could work out to a maximum wager of as much as €10.00, which might be actually considered quite steep for some players, but the low range works for low rollers too. There is a top jackpot of 5000 coins across the fifth pay-line.

Icons are radically different from the typical classic slots game, and although “Bars” have been included, these are flowery, sort of frilly Bars that might seem more apt in the Garden of Eden perhaps? Thematically the fall of man as depicted by this Biblical tale, kind of works well with a gambling game.

Other Icons include the serpent, apple tree - although we thought that Eve gave Adam a fig to eat – a bubbly sort of thing to land the big wins (we are not sure what this represents) an apple, and a rose (also not sure what the rose represents). Unfortunately, or perhaps we should say fortunately, there is no Adam and Eve, scantily clad with strategically placed fig leaves, and offering us the very big wins. It is possible that the designers of the game thought that adding these characters would be in bad taste?

We reckon that to win big in this game, some strategic money management techniques need to be used, unless you have pots of money to waste in trying to land the big prize. I had quite a good run in demo mode, and there were ample winning opportunities – this made playing a lot of fun – everyone wants to be a winner, even in demo mode.

Currenty there are no reviews for Eden Park. Be the first one who will review it.