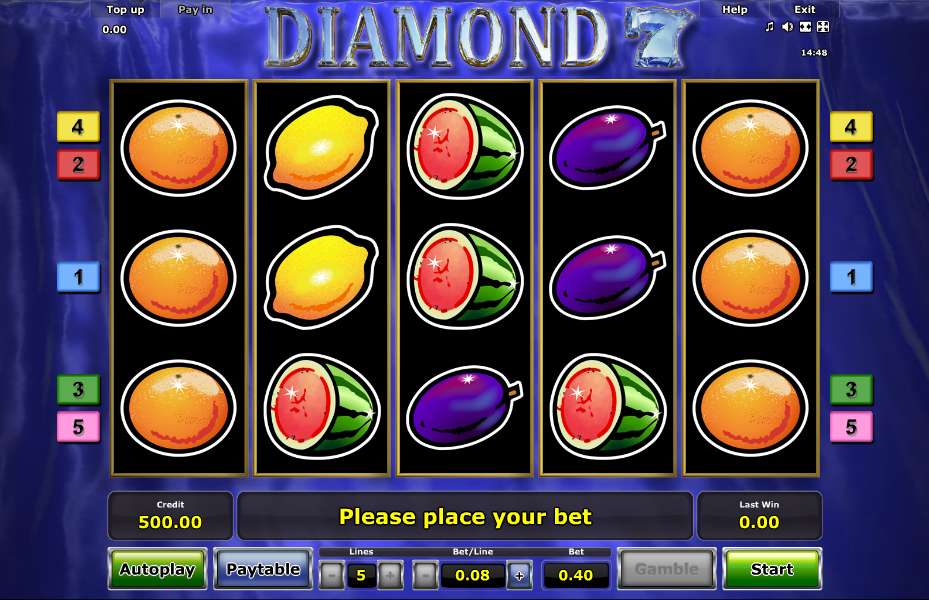 Diamond 7 is one of many Novomatic developed slots which is primitive, and based on fruit. The fruit symbols in this slot have been designed in the fashion of the old fruit machines, but the graphics are considerably worse the one-armed bandits of yesteryear. This doesn’t bode well for the Diamond 7 video slot. The game can be played over a total of 5 reels and just 5 paylines, meaning that there isn’t much room for winning, either. You cannot adjust the paylines, and the smallest coin value available is 0.08. It can rise up to 20.00 in total. Ultimately, the slot costs you 0.40 at its cheapest, which is downright scandalous. It can see you wager as much as 100.00 per spin on it, but few people will wager that kind of cash on this game. Diamond 7 has a maximum cash win worth 100,000 coins in all, but even that non-progressive jackpot can’t save this game.

This slot’s special features are virtually non-existent. There is a scatter icon which appears as a star, and it can offer you scattered wins worth 2x, 10x, or 50x your total bet. That is about as good as it is going to get for the Diamond 7 slot players.

The slot gets its name from the diamond 7 symbol, which is the best paying icon in the game. The trouble is, this symbol almost never appears, which makes it rather useless. A wild symbol certainly wouldn’t have hurt.

A gamble feature is pretty much the only special feature you are going to enjoy in this slot. It can be activated after any potential win, but given your odds of success are 50% or less, not too many players will switch it on.

Despite numerous spins – even on the cheapest wager – Diamond 7 seldom pays out. Moreover, its top paying icon fails to turn up even once in over 50 spins. Couple that with the lack of special features, and the truly shocking minimum wager, and everything about Diamond 7 spells disaster. This may not just be one of the worst Novomatic developed slots of all time, but it may just happen to be the worst slot ever made by anybody. There are virtually no redeeming features of the game, from a graphical, structure, or prize perspective, and very few players are going to be inclined to try playing this game.