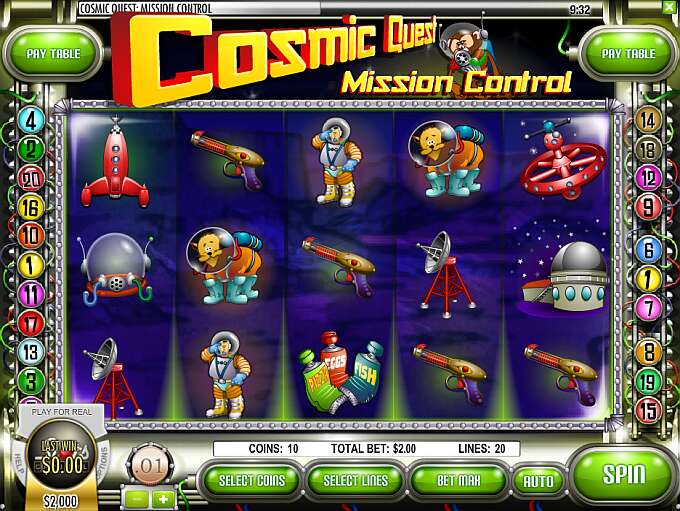 Cosmic Quest is one of several Rival Gaming slots developed under this “franchise”. Known as Episode 1 – Mission Control, this slot contains some very comical and cheesy space icons and imagery on its 5 reels and 20 paylines. The slot will permit players to choose coin sizes of 0.01 up to 0.25 in total. Players will also be able to select between 1 and 10 coins per spin. Floor bets in this slot can be staked for just 0.01 per line, per spin. Capped ceiling bets on the other hand are going to cost you upwards of 50.00 per spin. A good spin on the reels can see you win as much as 5,000 coins, via this space-age themed slot’s non-progressive jackpot.

There are quite a few of these for you to enjoy. Firstly, there is the wild icon, which also doubles as the best paying symbol in the slot. Known as the wild rocket wild, this regular wild symbol can replace all standard paying icons in the game. It can also become an expanding wild during the free spins bonus game, which has its advantages, of course.

Aside from that, a scatter icon is also collectable in this slot. Should players find 3 scattered monkeys in any position on the reels, then they will be able to trigger a free spins bonus round. As we’ve said, standard wilds will become expanding wilds during this bonus, which features a total of 10 free games.

As for the other symbols in the game, this slot features ray guns, space stations, space exploring dogs, moon bases, pilots, astronauts, helmets, space good, satellites and dishes. These can offer wins which range from a low of 3 coins up to a cash prize worth 750 coins for 5 astronauts appearing on any active payline in this slot.

A separate bonus icon also appears in Cosmic Quest: Episode 1 – Mission Control. The bonus symbol is the pink spaceman. When three or more of these pilot icons appear on the reels, a bonus round is triggered.

During the bonus round, players must use their “asteroid-blasteroid” skills to shoot down asteroids and win cash prizes. In short, this is a very simple pick and win game, and shouldn’t pose too much of a challenge to the player.

Currenty there are no reviews for Cosmic Quest I. Be the first one who will review it.