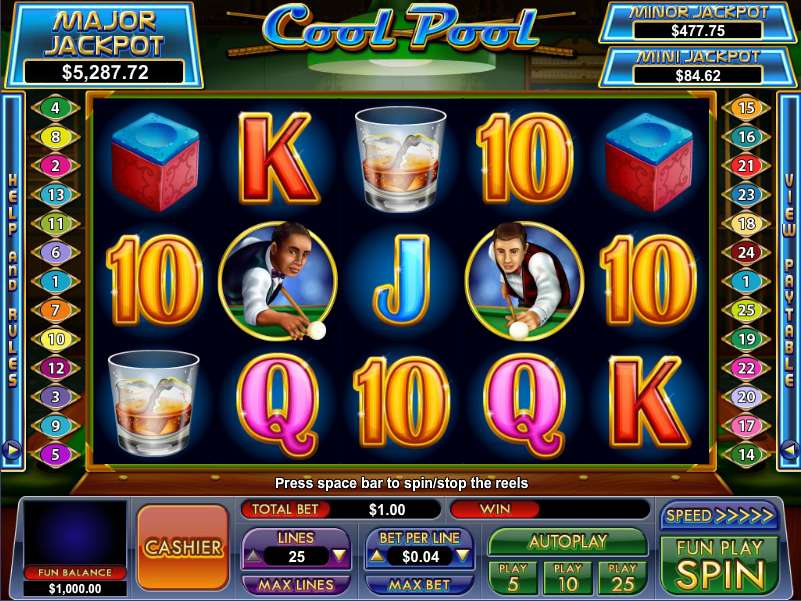 Of course, the first point to make is that this is a pool game, not a snooker game. While the name suggests this and the Rules and Paytable make it apparent, if the main screen appears with one of the participants, it will be confusing. They appear as if they belong at the Crucible, with their long white sleeve shirts, waistcoats, and bow ties. That's the only significant stumbling block. That isn't to say there aren't other difficulties. The design is unappealing and boring. Everything appears to be outdated. Cool Pool is written in blue text at the top, with a ceiling light similar to that found in pool halls in the background. The Major Jackpot sits in the top left corner, with two other jackpots on the other end.

The primary page is dominated by the reels. The two players make up half of the ordinary icons, with the rest consisting of the card icons of King, Queen, Jack, 10, and 9. Other graphics, such as a cue, a pocket, a referee, or a prize, would have been useful. The typography is huge and lacks flair, despite the fact that each letter is a different color. The numbers for the 25 paylines are on either side of the reels, with pictures of each in the Paytable.

With betting, you have a lot of options. You can play anywhere from one to twenty-five lines. There is equivalent flexibility with the actual betting amount. You can start at 0.01 and increase to 0.10 and 0.25. This isn't as good as some of the other Nuworks titles. Clicking Max Bet provides you the most credit per line, but if you want the game's maximum of 6.25, make sure the betting lines are set to 25. One of the pool players is in the top regular symbol. For 5 symbols, he's worth 5,000 credits, with 1 less for 500 and 3 worth 100. For 3 or more, it is worth half for the second player. These two, chalk and glass, are

There is a bonus that only activates if you play on the highest number of lines. It's a wonderful concept that encourages players to take more risks and be more adventurous. However, understanding requires concentration. If the overall free games win totals x10 the triggering bet or less, it activates at the end of the Pool Ball feature. There is an x20 stake if there is no win within this time. A 0-2 wager is multiplied by five, a 2-5 wager is tripled, and a 5-10 wager is doubled. Not to mention the Major, Minor, and Mini jackpots that can be won at the end of a bet at random.

Currenty there are no reviews for Cool Pool. Be the first one who will review it.